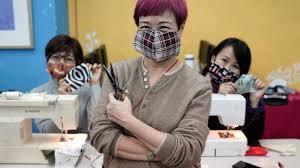 Is a homemade mask better than nothing at all? With an unknown number of asymptomatic virus carriers, some experts are advising people to fashion their own face coverings to prevent them spreading the disease.

As health workers across the world struggle to get protective equipment and stocks dwindle, health organisations have stressed that there is little scientific evidence to show that masks are effective at preventing healthy people catching COVID-19.

But some experts say they could be useful as a barrier to stop those infected -- particularly those without symptoms -- from contaminating others through the tiny respiratory droplets emitted when they cough, sneeze, talk or even breathe.

"It only works if everyone wears (them), and if everyone does, you only need a very basic mask, because a piece of tissue can block it," said KK Cheng, director of the Institute of Applied Health Research at Birmingham University.

"It's not perfect, but that's much better than nothing."

There is scant evidence on the effectiveness of do-it-yourself face coverings, however.

"It's not clear whether homemade masks would reduce transmission, there has been very little scientific research on this topic,"  Benjamin Cowling, epidemiologist at the University of Hong Kong, told AFP.

One 2013 Cambridge University study looked at a scenario of an influenza pandemic and subsequent shortage of surgical masks.

Volunteers were tasked with making their own masks from cotton t-shirts for the research, which found that improvised masks might reduce the likelihood of infection -- but not eliminate the risk.

"Our findings suggest that a homemade mask should only be considered as a last resort to prevent droplet transmission from infected individuals, but it would be better than no protection," the study said.

Even the doctors who recommend the use of masks, insist they should not be seen as an alternative to the most crucial prevention measures, such as hand washing and social distancing.

Since the start of the coronavirus epidemic, many western countries have stressed that the widespread use of masks is not necessary.

This position has surprised many in parts of Asia, where mask-wearing is a common practice.

"The big mistake in the U.S. and Europe, in my opinion, is that people aren't wearing masks," said Gao Fu, the head of the Chinese Center for Disease Control and Prevention in an interview with Science magazine last week.

Cheng said that mask wearing was not in "Western culture."

But he added that the authorities may also have wanted to dissuade panic buying of protective equipment that would leave shortages for key health workers.

World Health Organization guidelines say that only those who are sick and the people caring for them need to wear masks.

"There is no specific evidence to suggest that the wearing of masks by the mass population has any particular benefit," said Mike Ryan, executive director of the WHO's emergencies program, in a briefing on Monday.

"In fact there is some evidence to suggest the opposite," he said, adding people often did not know how to wear or remove the mask properly.

Ryan said there was also a "massive global shortage" of protective equipment.

"Right now the people most at risk from this virus are frontline health workers who are exposed to the virus every second of every day. The thought of them not having masks is horrific," he said.

In recent days, several European countries have updated their position on mask wearing, with the Czech Republic, Slovenia, and Austria announcing new rules to compel people to cover their faces in places like supermarkets.

Pulmonologist Nicolas Hutt, who works in Alsace, one of the French regions most affected by the epidemic, said people should wear "alternative masks" not produced for medical purposes.

These would act as a barrier in "areas where distancing measures are not properly followed, like shops".

Online tutorials for making your own masks have circulated widely.

While French authorities have stuck to the WHO guidance that healthy people do not need masks, the industry ministry's standardization board posted a manufacturing blueprint on Friday.

Prime Minister Edouard Philippe has also said that textile and paper firms would now be encouraged to make masks.

Some could even be luxury branded. At the weekend, fashion house Chanel said it was mobilizing dozens of its dressmakers to produce masks and gowns and would "start production as soon as the prototypes and raw materials have been approved."