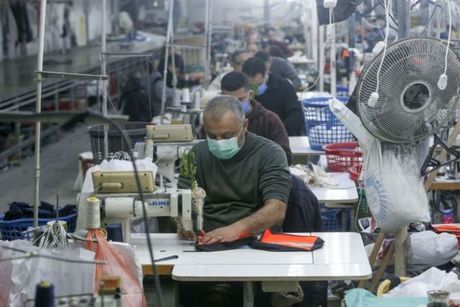 Queen Tex factory in Gaza used to specialise in manufacturing shirts and jeans, but with the novel coronavirus epidemic sweeping the globe it has pivoted into medicalwear.

Now lines of men are using old sewing machines to stitch together masks while also wearing them, as the blockaded Palestinian enclave develops a homegrown response to the crisis.

"We were intending to import masks and suits from China but there were difficulties importing, so we decided to make them ourselves," manager Hassan Alwan said.

His factory says it works to international standards but only has enough material to make around 1,000 hazmat suits.

The Gaza Strip has only had a handful of confirmed COVID-19 cases so far.

The suits, masks and gloves are being made initially for the local market, with the potential to later export to Israel which is fighting a far larger outbreak.

Gaza has been largely closed off by the Jewish state since the Islamist movement Hamas seized control of it in 2007.

Much of the world considers Hamas, with which Israel has fought three wars, a terrorist organisation.

Hamas has stipulated no masks or suits can be exported until the local market's needs have been met.

But Hassan Shehata, co-director of another factory, Hasanco, is optimistic he can sell to the Israeli market.

"Israeli companies sent us the cloth to produce medical masks for them. They need millions of masks," he said.

Dozens of employees work 10-hour days but there are not enough machines to hit their targets, he said.

Many Palestinian factories used to supply the Israeli market before 2007.

Now, the coronavirus crisis could allow the struggling Gaza textiles industry to make a comeback, said Maher al-Tabbaa of the local chamber of commerce.

"The Gaza clothing industry is characterised by high quality that competes globally if it is given the possibility of exporting."

Gaza has so far declared only 10 cases of the new coronavirus, starting with two people who returned from Pakistan and were already in quarantine when diagnosed.

Seven guards connected to them were later found to have been infected, while a 10th case was announced on Monday.

Hamas authorities have closed schools and mosques and Gaza's only other border, with Egypt, has also been closed.

More than 1,500 Palestinians who returned from Egypt shortly before the closure have been quarantined in the south of the strip.

Yet fears remain that any outbreak in impoverished Gaza could spread rapidly.

"Gaza is one of the most densely populated areas in the world –- this coupled with its already fragile health care system makes it a particularly high-risk case for the COVID-19 outbreak," he told the UN Security Council.

Gaza has far maintained a semblance of normality, with barbers and other stores still open, though staff are required to wear protective gear.

Apart from scissors and hair gel, barber Rami Azzam has boxes of gloves and masks and sanitiser spray at the ready as he snips.

"Health ministry employees come daily to sterilise the barbers, they have imposed tough measures," he said.

"But hardly any customers come for a shave."

Customer Suleiman al-Dahdour, 28, said he had been avoiding having a haircut until he heard of the protective measures.

"Of course there's fear," he said. "But as you see, the barber's wearing a mask and gloves."