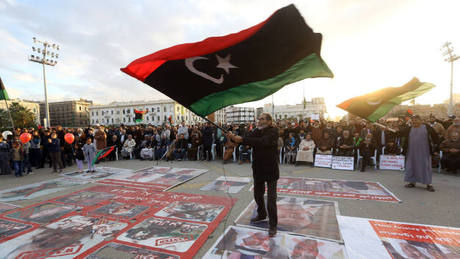 A year ago, Libyan strongman Khalifa Haftar began his offensive to seize the capital Tripoli from the UN-recognised government, a conflict which has left hundreds dead and over 150,000 displaced.

Here is a recap.

On April 4, 2019, Haftar orders his troops to advance on Tripoli, seat since 2016 of the Government of National Accord (GNA), which he claims is backed by "terrorist" groups.

Haftar supports a parallel administration based in the eastern city of Tobruk and his forces already control the country's main southern oil fields.

The assault is ordered as United Nations Secretary-General Antonio Guterres is in Libya for a visit aiming to cement a political deal on holding elections.

The next day, the Security Council calls on Haftar's forces to halt their advance.

On April 7, Haftar's forces say they have carried out their first air strike on a suburb of Tripoli, where the GNA is based.

The GNA announces it has launched a "counteroffensive".

Fighting intensifies the next day.

On June 26, GNA forces retake the town of Gharyan, the main supply base for Haftar's forces southwest of the capital.

On November 5, The New York Times reports that Russia has sent some 200 mercenaries to support Haftar. Moscow denies the claim.

On November 27, Turkey and the GNA sign a military and security deal.

A UN report on December 10 accuses several countries of breaching a 2011 arms embargo by supplying the opposing camps.

While Turkey and Qatar support the GNA, Haftar is backed by Egypt, Jordan, Saudi Arabia and the United Arab Emirates among others.

On January 5, 2020, Turkish President Recep Tayyip Erdogan announces the deployment of Turkish soldiers to Libya, days after getting parliament's approval.

Turkey and Russia broker a ceasefire that comes into effect on January 12 after months of fighting outside Tripoli.

On January 13 in Moscow, GNA chief Fayez al-Sarraj signs the deal but Haftar leaves the next day without doing so.

Since then, fighting has continued, with repeated violations of the fragile truce.

The next day, at a summit in Berlin, world leaders commit to ending all foreign meddling and to upholding the 2011 weapons embargo.

Barely a week later, the United Nations mission to Libya slams persistent violations of the embargo, saying the "fragile truce is now threatened by the ongoing transfer of foreign fighters, weapons, ammunition".

In late February, Salame lashes out at "cynics" he says are undermining talks and says he needs "much more" international support.

On March 17, the United Nations and nine countries call on Libya's warring parties to cease hostilities to allow health authorities to fight against the new coronavirus.

The GNA and Haftar's forces welcome calls for a humanitarian pause, but the GNA says it reserves "the right to respond to daily assaults targeting civilians and public facilities".