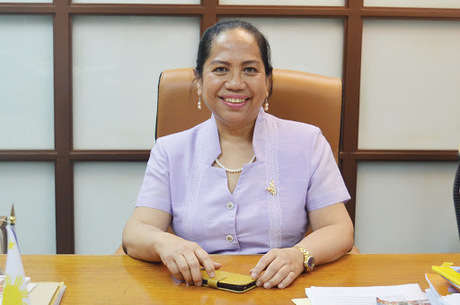 The Philippines' Ambassador to Lebanon Bernardita Catalla has died of complications from the coronavirus, one of only 16 recorded deaths in the country since the start of the pandemic, media reports said on Thursday.

Catala died at the age of 62 after she was infected with the novel COVID-19.

The Philippines' department of foreign affairs expressed its "deep sadness" at the passing of Catalla, which it said was the result of "complications arising from Covid 19".

Catalla had been very active in recent months organising the repatriation of some of the tens of thousands of Filipino domestic workers hoping to leave the country.

A severe currency crisis in Lebanon has had a major impact on foreign domestic workers, who no longer have dollars to send home and can be restricted in their freedom of movement by an archaic sponsorship system.

Catalla's death and three other fatalities reported by the health authorities on Thursday brought to 16 the number of people confirmed to have died from the virus in Lebanon.

The official number of cases stood at 494.

Strict confinement guidelines have been issued by the Lebanese government, including a 7:00 pm to 5:00 am curfew that is followed with varying thoroughness depending on the city and neighbourhood.

Terrible news, the official number of the day, 494 cases, is far from reality.

yeah--iran's proxies are hiding the numbers. Syria has reported SIXTEEN--smh.

But then again is unexpected SOS? We have a Kizb led government that has had numerous loads of infected individuals fly in from Iran to get free treatement in Lebanon. The Iranians were only to happy to dump some of their sick on Lebanon and then we have the uneducated masses head for churches and or mosques unabted to pray to their dead for salvation and spreading this virus like wildfire. Why should we be surprised where you have poeple in Lebanon who have not seen each other in a day but to stand and greet each other with 25 kisses like to long lost lovers? or better yet the village idiot that goes from one house to another to visit carying COIVID 19 on his forehead?
Sadly my friend this is the reality in Lebanon....