HRW Accuses Lebanon of Discriminating against Refugees in Virus Response 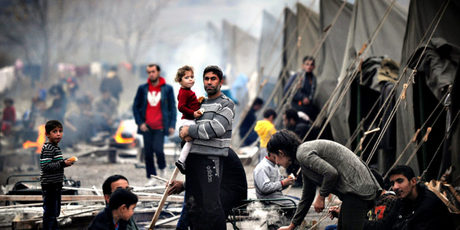 Lebanon hosts between 1.5 and 2 million Syrians, nearly one million of whom are officially registered as refugees with the United Nations.

Human rights groups have repeatedly accused the Lebanese government of pressuring refugees to return to Syria despite the absence of any settlement to end a conflict now in its 10th year.

An outbreak of the COVID-19 pandemic has made matters worse for Syrian refugees in the country.

Since early March, at least eight municipalities have implemented curfews that restrict the movement of Syrian refugees to certain times because of coronavirus concerns, HRW said.

It said the measures were introduced before the government announced a nationwide curfew and include tight restrictions that do not apply to the rest of the population.

"There is no evidence that extra curfews for Syrian refugees will help limit the spread of COVID-19," said HRW refugee rights researcher Nadia Hardman.

"The coronavirus does not discriminate, and limiting the spread and impact of COVID-19 in Lebanon requires ensuring that everyone is able to access testing and treatment centres."

Lebanon has recorded 479 confirmed infections and 14 deaths from the coronavirus, prompting the government last month to introduce a daily curfew from 7 pm to 5 am.

Not a single refugee in the country has contracted the virus, but discrimination against them is on the rise.

In the village of Brital, in eastern Lebanon, municipal authorities only allow Syrians to move around between 9 am and 1 pm and then only to perform "necessary" tasks, such as going to a pharmacy or supermarket," HRW said.

Authorities have threatened Syrians with legal action and the confiscation of their legal documents if they violate the curfew.

"Such measures risk the virus spreading if Syrians are too scared to seek medical help after 1 pm," HRW said.

Similarly, the Kfarhabou municipality in northern Lebanon has imposed a daily curfew for Syrians from 3 pm to 7 am.

Another municipality went so far as to prohibit Syrians from leaving their homes at any time, HRW said.

"Lebanon has a duty to ensure the health of Syrian and Lebanese residents alike," Hardman said.

The government "won't be successful against COVID-19 unless it ensures everyone has access to information, testing and treatment".

Health Minister Hamad Hassan said the responsibility for refugee health care should be shared by the Lebanese government and by United Nations agencies.

Hassan criticised the international community for being slow to respond to the COVID-19 crisis in host countries like Lebanon.

If the HRW feel so strongly that Lebanon should not force those to be repatriated then the nations who make up the HRW should take them. Its not enough that Lebanon is bankrupt and is run from Tehran now we are being told to keep refugfees at the cost of Lebanon with nothing in return. Tfeh 3ala heik dowli who cannot stand up for the Lebanese citizen who ultimately pays for this. Try importing 1000 foregners into Iran or even Syria and see what happens!