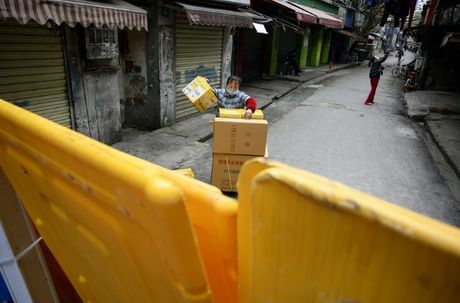 "It's definitely not as intimate," sighs a woman dressed in a raincoat, mask, gloves and visor after speaking to a friend over one of the imposing barricades that have sprung up all over Wuhan.

The Chinese city, the epicentre of the coronavirus pandemic, is very slowly re-emerging from more than two months of demoralising lockdown.

But rows of plastic yellow or blue barriers still run along streets throughout the city of 11 million people, just one indication of how life for its traumatised residents remains severely disrupted.

The fences, erected to help guard against the spread of infection by limiting people's movements, have made negotiating Wuhan's still-quiet streets something of a sport.

They stand at about six feet (1.8 meters), too high to scale, but some have grabbed the opportunity when nobody is looking to brazenly fashion a way through.

On the city's Shanghai Road, a man squeezes into a gap between one barrier and the wall of a building, then simply ducks under some shared bikes wedged there to stop people doing just that.

Guards seated just across the street, supposed to make sure people go through the permitted entrances, do not react.

On his hands and knees, a middle-aged man crawls under a barrier, while a woman on the other side, carrying a bag of vegetables, helps hold the fence up out of his way.

At lunchtime, a group of food delivery drivers wait outside a tiny opening in one long row of fences. A restaurant worker pops out to pass them the takeaway through the slit.

"It's definitely inconvenient. I don't know when things will improve," says one deliveryman despairingly.

With the outbreak deemed under control, rules in Wuhan have been eased to allow people to enter the city, although many communities still restrict residents coming in and out and they cannot leave the city until April 8.

But Wang, who is attempting to hold a conversation on a street corner with a friend on the other side of one divide, accepts the barricades as a necessary evil.

"I think they will stay for some time because it's still not too safe," she says.