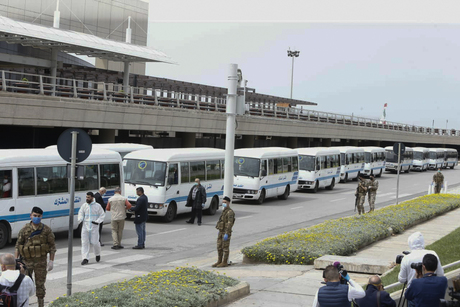 Lebanon on Sunday started repatriating nationals who were stranded abroad in its first flights in weeks since it closed its international airport to stem the novel coronavirus.

Many Lebanese work abroad, in the Gulf or in Africa, while thousands of youth study in Europe.

The first of four planes touched down at the Beirut international airport late in the morning bringing in 78 passengers from Riyadh, local television reported.

A second carrying 79 passengers from Abu Dhabi followed in the afternoon, the National News Agency said.

The Mediterranean country announced a lockdown and closed its airport from March 19 as part of measures to curb the spread of COVID-19, which has officially infected 527 people and killed 18 nationwide.

An AFP photographer saw a dozen buses outside the airport, which the health ministry said were to transport the passengers to their homes to self-quarantine or to a hotel to await the results of tests on arrival.

Authorities said more than 20,000 people had signed up to be repatriated in total this week or at the end of the month.

It has also announced return trips to Paris, Madrid and Kinshasa on Tuesday.

Lebanese returning home must either test negative for the virus no longer than three days before their return, or be tested immediately upon arrival, according to government guidelines.

They must pay for their own ticket and their families are not allowed to meet them at the airport.

The government has said priority will be given to those with critical health conditions such as diabetes or cancer, those aged over 60 and under 18, and families.

But critics have complained of steep ticket fares, while a financial crisis has severely restricted transactions from Lebanese bank accounts.

Coronavirus is the latest crisis to hit Lebanon, which is already reeling under a crumbling economy.

Due to an acute liquidity crisis, banks have since September increasingly been restricting access to dollars and have halted money transfers abroad.

On Monday, however, the banking association agreed to allow dollar transfers to Lebanese students outside the country to help them face the coronavirus pandemic, the finance ministry said.

Prime Minister Hassan Diab on Sunday told reporters the government was studying the possibility of supporting returning Lebanese students with a ticket.

The public transport minister said the MEA would offer half-price tickets to students in need, while the foreign and health ministers said Lebanese donors would cover the other half, according to the NNA.

Lebanese expatriates and activists have clamored online for MEA to lower the price of its tickets and help those who can't afford it.

The airline on Friday claimed tickets were more expensive -- $650 for an economy class seat from Riyadh and $1,800 for a cheaper fare from Abidjan for example -- because planes would be empty on the way out to evacuations.

Repatriating expats who are potentially infected is reckless . Didn’t the MEA say it wasn’t going to charge travelers? Yet here I read they’re paying $1800 for a one way ticket in economy class lol

They’re being ripped off.