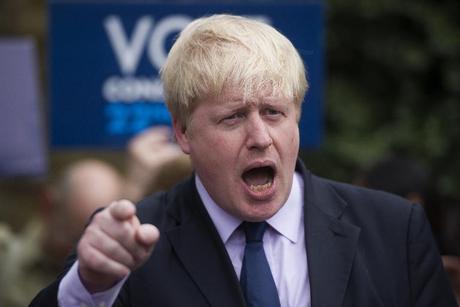 Boris Johnson, who led Britain out of the European Union in January after years of political chaos and paralysis, now finds himself professionally and personally tested like never before by the COVID-19 crisis.

The prime minister was riding high after winning a thumping election victory in December, and his initial response to the virus outbreak sent his personal popularity ratings soaring.

But Johnson himself was diagnosed 10 days ago with COVID-19 and he is now in hospital undergoing tests, just as his government faces increasing criticism over its actions.

Healthcare staff have complained they lack protective equipment, and like many countries, Britain lacks ventilators and mass testing for the virus.

As the death toll mounts, Johnson's liberal instincts are under scrutiny amid reports he initially resisted tough measures to stop the virus spread. A nationwide lockdown was eventually ordered on March 23.

Before coronavirus, the 55-year-old's legacy looked set to be defined by his role leading the Brexit campaign in the 2016 referendum and then, as prime minister, finally taking Britain out of the EU on January 31.

But now his fate may depend on how Britain emerges from the crisis.

The Conservative leader has always been a divisive figure, hailed by many for his optimism and humor, but accused by others of Trump-style populism and a disregard for the truth.

He has been sacked twice for lying and also faced accusations of prejudice for his work as a newspaper columnist over the years, describing gay men as "bumboys" and black African Commonwealth citizens as "piccaninnies".

As recently as 2018, he drew criticism for writing that Muslim women in the full veil looked like "letter boxes", even while arguing they should be free to wear what they want.

But Johnson rejects accusations of racism, and as mayor of multicultural, multifaith London for eight years, he advocated an amnesty for undocumented migrants.

His supporters say he is socially liberal, and simply likes to shake things up.

Johnson is also known for his colorful private life, but his celebrity status has allowed him to shrug off scandal.

He is twice married and believed to have at least five children, including one from an affair, and currently lives with his pregnant girlfriend in Downing Street.

With his messy blond hair, jokey style and willingness to make himself look ridiculous -- once getting stuck on a zip wire brandishing British flags -- Johnson's appeal has long been that he is not like other politicians.

But critics have commentated that in the coronavirus outbreak, he has seemed at times to struggle with delivering the bad news required.

He has often deferred to his scientific and medical advisers, and insists he is led by their evidence.

Alexander Boris de Pfeffel Johnson was born in New York in 1964 into a high-achieving family, and his sister said as a child he wanted to be "world king".

He spent his early years in Brussels, where his father worked for the EU, then attended the elite Eton school in England before studying classics at Oxford University.

He first worked as a journalist for The Times, where he was sacked for making up a quote, and moved on to become Brussels correspondent for the right-wing Daily Telegraph newspaper.

There he made his name by writing "Euro-myths" -- exaggerated claims about the EU.

Johnson came to public prominence in the 1990s as a guest panelist on a satirical television show, where his eccentric and self-deprecating wit made him a national figure known just as "Boris".

His first few years in politics did not go smoothly -- in 2004, he was sacked from the Conservatives' shadow cabinet for lying about an extra-marital affair.

But in 2008 he was elected mayor of Labour-voting London, an achievement commentators put down to his unconventional style.

Even for an unpredictable politician like Johnson, his choice to support Brexit in Britain's fractious 2016 referendum was a huge gamble -- and it took a while to pay off.

When his side won, he was viewed as an obvious candidate to take over as prime minister, but pulled out of the race after a key supporter betrayed him.

He was named foreign secretary under new premier Theresa May, but quit two years later over her Brexit plan.

When she resigned after failing three times to get her EU divorce deal through parliament, Johnson took over.

Within six months he had renegotiated the deal, won an election and taken Britain out of the EU.

"Those who did not take him seriously were wrong," French President Emmanuel Macron said at the time.

Britain's long-term relationship with the bloc is yet to determined, however.

Even before the coronavirus outbreak, Johnson stood accused of underplaying the challenge of negotiating a trade deal with Brussels by December 2020.

He still insists this can be done.