G20 Agrees to Debt Relief for Poorest Countries amid Pandemic 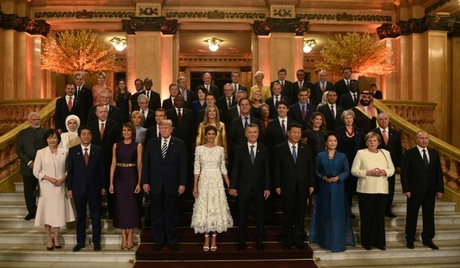 With the global economy plunged into the worst recession in a century, the Group of 20 nations on Wednesday announced a one-year debt standstill for the world's poorest nations as they struggle to deal with the coronavirus pandemic.

The G20, which brings together the world's largest economies, also reiterated the pledge to deploy "all available policy tools" to deal with the health and economic crisis caused by COVID-19.

With over two million cases and fatalities approaching 130,000 worldwide, many of the less developed countries are facing the heaviest burden since they do not have the spending power to deal with treatment and the economic fallout caused by widespread lockdowns of their economies imposed to contain the virus.

The G20 finance ministers and central bankers endorsed "a time-bound suspension of debt service payments for the poorest countries," and in the communique following their virtual meeting, said "All bilateral official creditors will participate in this initiative."

Saudi Finance Minister Mohammed Al-Jadaan, who currently chairs the group, said this means "poor countries don't need to worry about repaying over the course of the next 12 months."

The initiative will "provide north of $20 billion of immediate liquidity" for poor countries to use "for their health system and support their people facing COVID-19," he said in a press briefing.

The G20 officials "put our money where our mouth is, and commit to further support the world as it faces this pandemic," he said.

The International Monetary Fund and World Bank had been calling on the governments to provide debt relief to the countries most in need, and finance ministers from the Group of Seven advanced economies agreed to do so on Tuesday providing the G20, which includes China and Russia, was in favor.

The leaders of the IMF and World Bank hailed the announcement, calling it "a powerful, fast-acting initiative that will do much to safeguard the lives and livelihoods of millions of the most vulnerable people."

The Washington-based lenders have rushed to roll out emergency financing and have received requests for aid from 100 countries.

The G20 called on private creditors, working through the Institute of International Finance, to participate in the initiative which extends to the world's 76 poorest countries.

The IMF has called the economic crisis the "Great Lockdown," warning it will slash $9 trillion off of global growth as the world economy contracts by three percent this year, the most severe downturn since the Great Depression in the 1930s.

The situation could get much worse if the pandemic lingers into the second half of the year or resurges.

The G20 officials also reiterated their commitment to deploy "available tools" to deal with the health and economic crisis caused by COVID-19.

"Our efforts must continue and be amplified," the communique said.

The IMF estimates the 20 governments already has committed about $7 trillion towards combating the virus and providing economic lifelines to households and companies struggling to weather the crisis.

But more will be needed to restart the global economies once the pandemic has passed.