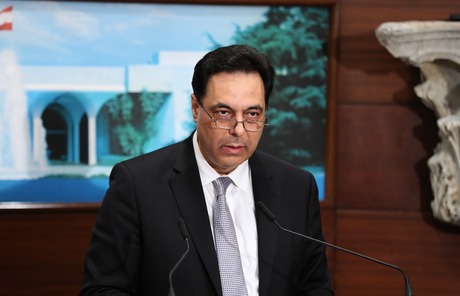 Prime Minister Hassan Diab on Friday launched a scathing attack on Central Bank Governor Riad Salameh and said there is “suspicious ambiguity” in his handling of the monetary situation.

“There is suspicious ambiguity in the central bank governor's performance as to the lira's dramatic deterioration,” Diab said in an address to the nation that followed a Cabinet session and a ministerial financial meeting at the Baabda Palace.

“There are gaps in the central bank's performance, strategies, clarity and monetary policy and the bank's losses have reached USD 7 billion this year,” Diab added.

“Let the central bank governor declare the facts to the Lebanese,” he urged.

Lamenting that some are “insisting on deepening the financial crisis,” the premier emphasized that the government is “firm in its decision to protect the country.”

“We will not allow any tampering with the interests and food security of the Lebanese,” he vowed.

Diab concluded his speech with a stern warning that “the state will strike firmly against those who think that we'll stand idly by as they plot to steal people's money through hiking the dollar exchange rate.”

Diab added that the government has agreed with President Michel Aoun to hire an independent international auditing company to review the central bank's performance.

The Lebanese pound has been on a downward trajectory for weeks amid a worsening liquidity crunch and an economic slump. But it appeared to be in a free fall over the last few days, selling as low as 3,800 pounds to the dollar, down from a fixed peg of 1,500 pounds to the dollar in place for 30 years.

"The central bank is either incapable, absent or directly inciting this dramatic depreciation," Diab charged.

The central bank's decision earlier this week requires local banks to convert cash withdrawals from foreign currency accounts to the Lebanese pound, at a market rate determined daily by the banks. It also applies for money transfers, which was first implemented Friday, when Lebanese media said the rate was 3,625 pounds to the dollar.

The decision sucked dollars out of the market, driving up the black market price, as well as panic among depositors. Protesters took to the streets on Thursday to denounce the governor's decision in rallies that had all but disappeared since movement restrictions were put in place because of the spread of the coronavirus.

Experts say the central bank's decision is likely to swamp the market with the Lebanese pound and appeared designed to replenish the local banks' foreign currency reserves and reduce the gaps in their balance sheets.

Salameh, governor since 1993, was a key player in Lebanon's post-war economy. For the past few years, he has been criticized by Hizbullah for his implementation of U.S. sanctions against the Iran-backed group.

The Lebanese, who have relied on a stable national currency that was pegged to the dollar since the end of the 1975-1990 civil war, are facing the worst economic and financial crisis in decades. The tiny Mediterranean country of about 5 million people is one the most indebted in the world. Nationwide protests broke out in October against the government because of widespread corruption and mismanagement of resources.

Diab's government came to office in January and was quickly engulfed in a nationwide health crisis over the novel cornavirus, a crisis that deepened the country's economic recession.

Lebanon has a large diaspora that sends foreign currency home -- an income that was already dwindling since last year -- and relies on transfers from here to Lebanese students studying abroad. Also, many Lebanese keep their savings in foreign currency.

Never has Lebanon known or seen a Prime Minister who Vows to 'Strike Firmly' as much as this one, ever!

Diab: There are gaps in the central bank's performance, strategies, clarity and monetary policy and the bank's losses have reached USD 7 billion this year.

The dweeb does not question how much the wars initiated by his hezbollah bosses cost the treasury and never questions the almost $30 billions the FPM managed Energy ministry has cost the central bank.

And 75 days in office, and still don't have an economic plan or what the future is in Lebanon I guess the only plan is the scapegoat plan.