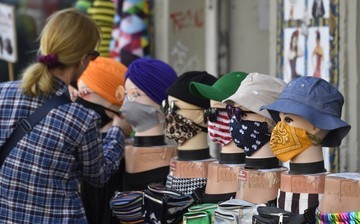 European countries are working to find a balance in how far to ease coronavirus lockdowns, with Germany enforcing mandatory masks in all shops from Wednesday, as the crushing global economic cost of the pandemic becomes clearer.

Excitement over moves towards normality is being tempered by fear of fresh outbreaks of a disease that has already killed 214,000 people worldwide.

Even a gradual return to everyday activity is "risky", warned French Prime Minister Edouard Philippe, as he unveiled plans to gradually end the lockdown starting next month.

From Wednesday in Germany, masks will be needed to enter shops, which began to open last week after the government declared its outbreak under control.

Nose and mouth coverings are already compulsory on buses, trains and trams.

"We all need to take care that we don't end up with more infections," said Lothar Wieler, president of Berlin's Robert Koch Institute.

Forecasts warn of the worst global recession in a century, with demand for goods gutted, and travel and tourism hammered.

British Airways became the latest airline to sound the alarm, saying it may have to cut its workforce by a third, while big banks are reporting deep falls in quarterly profit.

In Lebanon there were more existential signs of economic crisis, with protesters confronting soldiers in defiance of a nationwide lockdown, complaining they could no longer feed their families.

And with warnings mounting of a meat shortage in the U.S., the White House said President Donald Trump would sign an executive order compelling meat-packing plants to stay open, despite a string of coronavirus deaths in the industry.

The United States has reported its millionth coronavirus case, and at over 58,000 the country's COVID-19 death toll is by far the world's highest -- surpassing the number of Americans killed in the Vietnam war.

Italy, Spain and France have been the worst affected European countries, with each reporting more than 23,000 deaths.

But daily tolls appear to be on a downward trend and they are all charting their way out of shutdown.

Nations from Russia to Nigeria also plan to ease lockdown measures, despite warnings from experts of a second wave of contagion if restrictions are lifted too hastily.

"For almost one month I have not earned a penny," he said. "I hope life will soon return to normal."

More than three million people worldwide are known to have caught the respiratory disease that first emerged in China in December.

China's outbreak appears to be under control with no new deaths reported for two weeks straight and confirmed fatalities at around 4,600 -- although doubt has been cast on the accuracy of these figures.

Chinese state media said Wednesday that the top legislature will next month hold its annual meeting, which had been postponed for the first time in decades due to the virus.

The rescheduled session on May 22 is a signal from the leadership that China has largely brought its outbreak under control, said Hong Kong-based analyst Willy Lam.

"It's a sign that China is back on its feet, and the economic machinery keeps humming, and a big reassurance to the people that the epidemic is over," he told AFP.

Scientists are scrambling to develop treatments and a vaccine, with myriad studies under way -- including one from the US Department of Homeland Security into how ultraviolet radiation destroys the virus.

While that research has not yet been published, people in Indonesia are soaking up rays in the hope that the tropical country's plentiful sunshine will ward off the disease.

"I always avoided the sun before because I didn't want to get tanned," said Theresia Rikke Astria, a 27-year-old housewife in Indonesia's cultural capital Yogyakarta.

"But I'm hoping this will strengthen my immune system," she added.

Hundreds of New Yorkers were able to access walk-in virus and antibody tests for the first time on Tuesday, even without serious symptoms or underlying health issues.

Ariel Krupnik, 32, was among those willing to wait two hours for a $300 blood test.

Although the results are not 100 percent reliable -- and even if it is not proven that antibodies confer total immunity -- Krupnik said a positive result would mean feeling less compelled to stay inside all the time.

"I can go help out other people that are having it," Krupnik said, as it would mean he might be able to donate blood for experimental plasma therapies.

Meanwhile Britain has issued a warning of coronavirus-related syndrome emerging in children -- including abdominal pain and inflammation around the heart.

"What I would also stress is that it is rare. Although it is very significant for those children who do get it, the number of cases is small," said Health Secretary Matt Hancock.