Iran Says 'Curbing Virus' Even with Over 2,000 New Cases 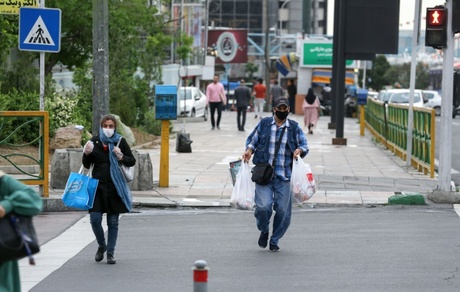 Iran on Wednesday said it was close to "curbing" the new coronavirus outbreak even as it reported more than 2,000 fresh infections for the third day in a row.

"We have been progressing at every step in the past three months... in fighting this dangerous virus and are nearly on the verge of curbing this disease," said President Hassan Rouhani.

Iran would "even not have these problems" if health protocols "were more closely observed in some of the provinces that are currently in an unfavourable situation", he told a televised cabinet meeting.

At least 24 of Iran's 434 counties were "red" -- the highest level on the country's colour-coded risk scale, according to deputy health minister Alireza Raisi.

He said at a virus taskforce meeting broadcast on Tuesday that 218 counties were still deemed low-risk, which could drop to 183 since the virus had "started peaking" in some regions.

He added that most of the fatalities since Iran reported its first two deaths in February were above 70 years old, and that younger Iranians were in less danger.

Health ministry spokesman Kianoush Jahanpour said 2,346 new infections were confirmed across the country in the past 24 hours, raising the total to 126,949.

More than 98,800 of those hospitalised had recovered and were discharged, while 2,673 were in critical condition.

He also raised the death toll to 7,183 with 64 fatalities in the past day.

According to Jahanpour, there were no deaths over the same period in nearly a third of Iran's provinces, while eight others only had one.

Khuzestan province was still the worst-hit, and the rest of the country was in "relative stability", he added.

Iran's virus cases have been on a rising trajectory since May 2, when it reported its lowest new infections since March 10.

A taskforce official said Sunday that the rise was due to a surge in testing as Iran started "looking at those infected and not hospitalised".

"It is possible that the reported number of infections have gone up, but this in no way means more have been infected with COVID-19," said Ali Akbar Haghdoost.

Experts both at home and abroad have voiced scepticism about Iran's official figures, saying the real toll could be much higher.