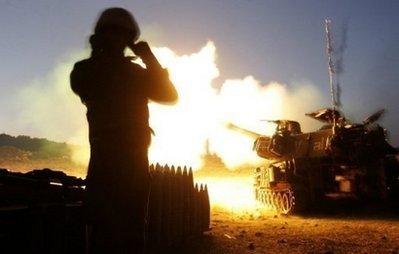 The Israeli military said Thursday that it would be prepared to respond to any Hizbullah attack by striking homes, factories and other civilian infrastructure used by the group.

It however added that it had no interest in an escalation and believed the same was true for Hizbullah.

The remarks were voiced during a briefing with reporters focused on the Iranian presence in Syria.

The Israeli army suggested that Iran is slowly pulling out of Syria in response to Israeli strikes, as well as growing domestic discontent linked to the economy and its handling of the coronavirus pandemic.

He acknowledged some movement by Iranian military advisers and a reduction of personnel in some areas, but said that was because fighting there had ended and Syria had "won." He said Israel is lying when it links those movements to its airstrikes.

Just read the headline! There is not a single Arab government Israel will say that it is not “seeking escalation!” But only aggression.

Israel is experimenting with a new government lineup where the Prime Minister is also handling the Humour Ministry portfolio. Gantz wanted it but couldn't pass the straight-face test.