Khashoggi's Fiancee Says 'No One Has Right' to Pardon Killers 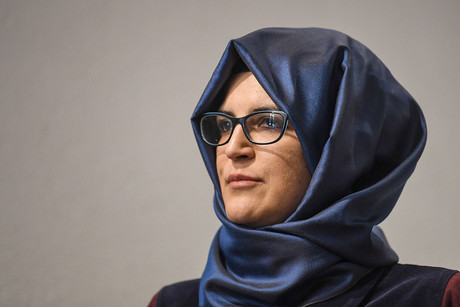 The Turkish fiancee of murdered Saudi journalist Jamal Khashoggi said Friday "no one" had the right to pardon his murderers after his sons said they "forgive" the killers.

Khashoggi -- a royal family insider turned critic -- was killed and dismembered at the Saudi consulate in Istanbul in October 2018. Crown Prince Mohammed bin Salman was accused of ordering the killing but the kingdom has strongly denied this.

"His ambush and heinous murder does not have a statute of limitations and no one has the right to pardon his killers. I and others will not stop until we get #JusticeForJamal," Khashoggi's fiancee Hatice Cengiz tweeted.

"The killers came from Saudi with premeditation to lure, ambush & kill him... We will not pardon the killers nor those who ordered the killing," she added.

Cengiz was responding to the Washington Post columnist's son Salah Khashoggi who tweeted earlier Friday that the sons "forgive and pardon those who killed our father" during Ramadan, the Muslim month of fasting which ends this weekend.

Analysts believe the announcement could spare the lives of five unnamed people sentenced to death over the murder in a December court ruling.

Turkish officials say Khashoggi, 59, was strangled and his body was cut into pieces by a 15-man Saudi group inside the kingdom's mission. His remains have never been found.