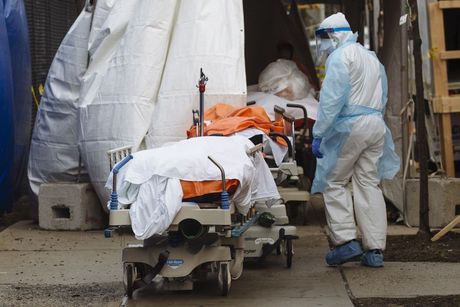 In a statement the ministry reported 20,125 coronavirus positive cases, and a total of 397 deaths countrywide.

The continent's most industrialized nation has the highest number of coronavirus infections, with the coastal province of the Western Cape accounting for 64 percent of infections.

A modelling consortium this week projected that more than a million people in South Africa could be infected by coronavirus, causing at least 40,000 deaths, by the time the disease reaches a likely peak in the country in November.

President Cyril Ramaphosa has given the go-ahead for the country to ease lockdown restrictions later this month, having gone into a strict five-tier lockdown on March 27.

So far 10,104 people are considered to have recovered since the first case was announced on March 5.

The government is staggering the easing of confinement measures to strike a balance between curbing the spread of COVID-19 and safeguarding the economy.

Despite a military patrolled lockdown, the government has struggled to keep civilians indoors, particularly in historically overcrowded townships, where many depend on informal trade to survive.

With 543,032 tests conducted so far, the country has developed an aggressive COVID-19 screening and testing approach modeled on years of experience fighting tuberculosis and HIV.

But government has come in for strong criticism for "draconian" bans on freedoms like purchasing cigarettes and alcohol.

The World Health Organization (WHO) announced on Friday that more than 100,000 cases, including 3,100 deaths, have so far been reported on the African continent.