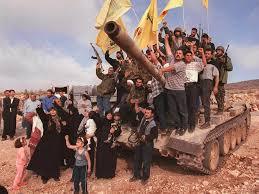 Jalal was barely three years old when Israeli troops withdrew from Lebanon two decades ago, but he speaks fondly of the Hizbullah "victory" that shaped his allegiance to the group.

"I feel honor and pride in this historic victory," said the 23-year-old who was brought up on stories of Hizbullah-led guerrilla operations leading to the Israeli pullout.

Founded in 1982 with backing from the Iranian Revolutionary Guards, Hizbullah touts the 2000 pullout as the first Israeli withdrawal from occupied Arab land under military pressure.

Today Hizbullah, which means "Party of God", is both a militant group with involvement in several regional countries and a major political force in Lebanon.

Twenty years after the Israeli withdrawal, Hizbullah still enjoys wide support among Lebanese youth who grew up with tales of the group heroically ending 22 years of Israeli occupation.

Also popular for its social services helping the poor, it continues to leverage the memory of this era to mold a new generation of loyalists gearing up to join its regional operations.

"We all wish we were there standing beside (Hizbullah) during the liberation war," Jalal told AFP over the phone, asking to use a pseudonym.

We wish we had been "fighting on their side and offering ourselves for our country," said the young man, whose brother has since fought with Hizbullah in neighboring Syria.

Bashir Saade, author of a book on Hizbullah, said "the party always needs to jump back into the past... to make sense of its political presence and vision."

The main site where Hizbullah celebrates its historical legacy is a memorial and museum in the hilltop bastion of Mleeta, built in 2010 to commemorate Israel's withdrawal.

At the former Hizbullah launchpad for operations, an Israeli Merkava tank is displayed in a pit with its barrel twisted into a knot, next to a mock grave for Israeli soldiers.

Under oak trees, a mannequin representing a Hizbullah fighter in military fatigues lies on a stretcher with a cast around his neck, while two similar figurines are seen carrying a heavy case of equipment.

Below them, visitors can walk through a 200 meter (220 yard) long tunnel that Hizbullah fighters built over three years to combat Israeli forces.

"The objective of the museum is to give the coming generations tangible proof of what happened," said tour guide Mohammad Lamah.

It shows them that "the struggle is worth it," he said.

But unlike most memorial landmarks, he said, the former Hizbullah outpost does not "immortalize a resolved case."

On the other side of the border, "Israel is still here."

Israel's pullout from Lebanon was celebrated as a major achievement both inside Lebanon and across the Arab world, gaining Hizbullah regional acclaim.

Its popularity further surged among supporters after it fought a 33-day war against Israeli forces in Lebanon in 2006.

Hizbullah has since evolved into a regional Iran-backed military force, operating in Syria and supporting groups in Yemen and Iraq, leading some to criticize it for turning its guns away from Israel and towards fellow Arabs.

Hizbullah is today the only Lebanese group not to have handed over its heavy arms after the country's 1975-1990 civil war and commands a military arsenal that rivals that of Lebanon's own army.

At home, cross-sectarian support for the group dwindled after an armed faceoff with fellow Lebanese during a political crisis in 2008.

Nonetheless Hizbullah, which entered the political scene after Israel's withdrawal, has become a dominant political player in Lebanon. Together with its allies it commands a majority in parliament and the cabinet.

The movement also runs a TV channel and an extensive social services network -- complete with schools, hospitals and charitable organizations.

Since 2006, Hizbullah and Israel have avoided all-out conflict, but Israel routinely targets Hizbullah positions in Syria.

Both sides have exchanged sporadic gunfire and endless threats, but analysts say a new conflict is not in the interest of either side.

But if there were a return to full hostilities, the 2000 Israeli pullout would likely provide inspiration for many young Hizbullah loyalists.

"I was young on the day of liberation and didn't understand what was going on, but I understood from my parents that it was something great," another Hizbullah supporter, aged 24, told AFP by phone.

"It is now the ambition of every one of us to take up arms to defend the oppressed," he said.

idiots of the world unite....

"It is now the ambition of every one of us to take up arms to defend the oppressed," he said.

Pathetic! You and you likes are killing the oppressed.