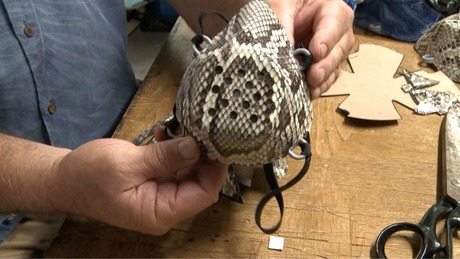 A Florida craftsman has come up with a novel way of tackling both the coronavirus pandemic and the problem of invasive pythons and iguanas that damage the state's fragile ecosystem.

Brian Woods, the 63-year-old owner of All American Gator Products, has turned his hand to designing face masks made out reptile skin.

"I took something that's very serious and turned it into a fashion statement," he said at his workshop in Dania Beach, 25 miles (40 kilometres) north of Miami.

Woods got his inspiration from a curious source -- a meme he saw of a horse wearing a woman's bra as a face mask. He asked his wife if he could borrow one of hers to test if the concept would work.

He now sells python skin face masks on his Facebook page for $90.

"They're wreaking havoc on the Everglades," she said, referring to the vast wetlands that occupy much of southern Florida.

The pythons were probably introduced to Florida as exotic pets toward the end of the last century and released into the Everglades, where they have no predators.

The Florida Fish and Wildlife Conservation Commission pays hunters a bounty to capture the snakes.

Iguanas likely also came to Florida as pets before being released into the wild, where they thrive in the balmy climate.