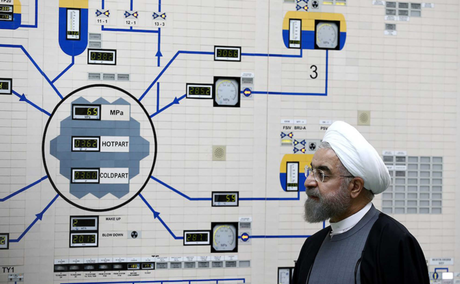 The United States said Wednesday it was ending waivers in its sanctions for nations that remain in the Iran nuclear accord, bringing the deal further to the verge of collapse.

Secretary of State Mike Pompeo said he was responding to Iran's "brinkmanship" -- its series of small but defiant nuclear steps, aimed at pressuring the United States to remove sanctions as called for by the 2015 accord.

"These escalatory actions are unacceptable and I cannot justify renewing the waiver," Pompeo said in a statement.

President Donald Trump bolted from the agreement negotiated under his predecessor Barack Obama, under which Iran had drastically curbed its nuclear activities.

But the Trump administration until now had issued waivers to allow companies, primarily from Russia, to keep carrying out the work of the agreement without risking legal ramifications in the world's largest economy.

The United States will notably do away with the waivers that allowed the modification of the heavy water reactor in Arak, which prevented it from using plutonium for military use, as well as the export of spent and scrap research reactor fuel.

Pompeo said that the United States was issuing a final 60-day waiver to allow companies involved in the projects to wrap up operations.

The Trump administration in the past had tacitly acknowledged benefits from letting other nations continue the nuclear deal.

In an extension in May 2019, the State Department said the waiver for Arak would help to "prevent it from becoming a factory for weapons-grade plutonium."

But with just months to go before the US presidential election in November, some observers see Trump as eager to kill off the nuclear accord -- hoping Iran will be forced to negotiate a fresh accord on his terms if he wins a second term.

"Revoking waivers could be the administration negotiating in plain sight with Iran," said Behnam Ben Taleblu, a senior fellow at the Foundation for the Defense of Democracies, which advocates a hard line on Tehran.

"By resetting what Washington will and will not tolerate, it is forcing Tehran to fight for every inch of its 'civil' nuclear program in any potential agreement," he said.

Trump's presumptive opponent, Joe Biden, supports the nuclear deal, arguing along with US allies Britain, France and Germany that it had worked effectively in constraining Iran until Trump walked out and imposed sanctions.

The three European allies, along with Russia and China, remain in the agreement.

Pompeo has recently made the legalistic argument that the United States is still a participant under a UN Security Council resolution for the purposes of seeking an extension of a weapons embargo on Iran.

In one exception, the United States still issued a waiver for Bushehr, oil-rich Iran's only nuclear power plant, where Russia has been supplying fuel.

Pompeo said the United States was providing a 90-day waiver extension on Bushehr to "ensure safety of operations."

"Our sanctions waiver does not extend to work on any additional units that might be constructed at Bushehr," said Christopher Ford, the assistant secretary of state for international security and non-proliferation.

"We are not of the view that Iran should be getting any additional nuclear reactors," Ford told reporters.

In justifying the latest moves, Pompeo also pointed to recent comments by Iran's supreme leader, Ayatollah Ali Khamenei, who said it was an "Islamic duty" to fight for the "liberation of Palestine."

Pompeo accused Khamenei of seeking a new Holocaust, saying: "The regime's vile rhetoric only strengthens the international community's resolve to counter its threats."

The Trump administration, which has close ties both to Israel and Iran's regional rival Saudi Arabia, called the 2015 nuclear deal a "disaster" and said the larger issue was reducing Tehran's clout in the region.

Iran's economy has faced intense pressure over the sanctions, with the United States seeking to block all its oil sales.