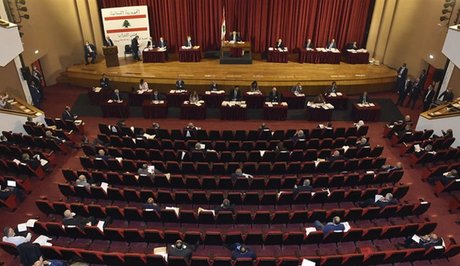 Parliament on Thursday approved several draft laws as al-Mustaqbal bloc and MP Faisal Karami walked out of the legislative session during the discussion of the controversial general amnesty law.

Mustaqbal leader ex-PM Saad Hariri said he asked his bloc to leave the session because "some parties want to return to square one" regarding the amnesty law.

"Speaker (Nabih) Berri exerted major efforts and I don't know the reason behind the attempt to outsmart each other," Hariri added.

Berri later adjourned the session after MPs decided to return the capital control draft law to the parliamentary committees.

He had earlier told MPs: "Put the amnesty law aside for now, perhaps God's mercy will be bestowed on us in a while."

MP Ali Hasan Khalil of Berri's Development and Liberation bloc said Berri adjourned the session "due to the withdrawal of a main component," in reference to al-Mustaqbal bloc.

"We wish the session ended in a different manner and Speaker Berri was keen on all the components of the session," he added.

Parliament had earlier in the day endorsed a draft law on lifting bank secrecy after an amendment was introduced at the request of a number of lawmakers who opposed the initial text. The amendment stipulates that the authorities authorized to lift bank secrecy are exclusively the central bank's Special Investigation Commission and the newly-created National Commission for Combating Corruption.

Parliament also approved a law for administrative appointments amid the objection of the Free Patriotic Movement, whose MPs are inclined to file an appeal against it before the Constitutional Council.

A draft law granting the government LBP 1,200 billion for its coronavirus social and economic aid plan was also passed, with Prime Minister Hassan Diab promising that a “transparent mechanism” will be devised for the distribution of funds.

The legislators meanwhile rejected a draft law on joining the International Organization for Migration on the grounds that the global body's charter encourages the integration of migrants and refugees.

The ambassadors of Norway, Switzerland and Canada attended the legislative session in the morning, according to LBCI TV.

Political parties are divided over what crimes should be pardoned and included in the controversial amnesty law.

Protesters chanting slogans against “treason” and the amnesty law meanwhile rallied outside the session's venue – Beirut's UNESCO Palace -- and in the southern cities of Sidon and Nabatieh.

The law involves a pardon for Lebanese who fled to Israel after its withdrawal from the South in 2000, another for Islamists jailed over terror-related offenses and one for drug-related offenses that would benefit prisoners who hail from the Bekaa.

Before the session, the secretary of the Strong Lebanon parliamentary bloc, MP Ibrahim Kanaan, said the legislative session must put an end to the process of transferring money abroad.

On the amnesty law, Kanaan said he regrets the subject is taking a “sectarian character.”

MP Qassem Hashem of the Development and Liberation bloc said: “Up to this point, there are still some differences in the positions of parliamentary blocs regarding the proposed amnesty law. Contacts are underway to reach an agreement.”

“The amnesty law in its current form is distorted. Certainly, we will not approve it,” MP Fadi Saad of the Strong Republic bloc said.

For his part, MP Michel Daher said in a tweet: “The draft law on capital control should be decided by authorizing the government, in cooperation with the Central Bank of Lebanon, to take all measures it considers necessary to protect and stabilize monetary and banking stability and the interests of depositors.”

No amnesty laws for criminals. Build new prisons , out the criminal at work, let them be useful for once.