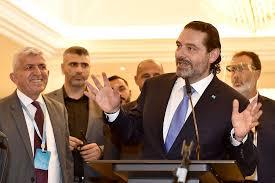 Ex-PM Saad Hariri on Thursday hurled a new jab at the Free Patriotic Movement, this time over an administrative appointments law that has been approved by parliament amid the objection of the FPM.

“Today we voted in favor of the law that stipulates a mechanism for choosing first grade civil servants. Of course there are parties that will file an appeal against this law, because they always aspire to appoint individuals in the way they see fit, but the best thing that can happen in this state is to remove the hands of political forces off these appointments,” Hariri said after taking part in a legislative session at the UNESCO Palace – parliament's temporary venue.

Asked whether he was accusing the FPM of seeking to maintain the distribution of shares in administrative appointments, Hariri said: “No. The FPM wants the entire country!”

As for the controversial general amnesty law, which is yet to be approved by parliament, the ex-PM and incumbent Beirut MP said: “Some are trying to depict the issue as if we want to get criminals and murderers out of jail, and this is not our goal. Our goal is to get out of prison individuals who been jailed for years without being put on trials and without going to court.”

Asked about those who fled to Israel in the wake of its withdrawal from south Lebanon in 2000, Hariri said: “There is a text in the amnesty law that tackles this issue and I don't know why there has been a sudden change today in the stances of some political parties.”

Responding to another question about his “targeting of the FPM and Minister Jebran Bassil,” the ex-PM said: “I mentioned the Free Patriotic Movement but I did not mention Jebran Bassil.”

they are all busy insulting and quarelling with each other because they trying to deflect the issues. they believe people will get their attention away from the huge crisis lebanon is going through....
they are all resorting to pre-1975 speeches, "they have more than we have, they are depriving us from our rights, they are collaborating with x,y z..."

and during that time the country is sinking with no captain on board....

I wasn’t around pre 1975 but I believe you, these people are the scum of the earth.

lol @ the shia western christian with triple nationality and a chip on his shoulder.