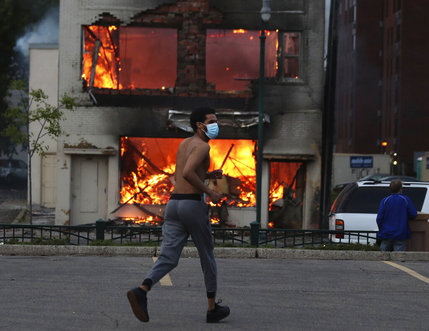 Fires continued to burn and one person was dead in Minneapolis Thursday after a second night of angry protests over the police killing of an African American man while in custody.

Demonstrators clashed with police, looted stores and set fires to shops and a construction site overnight in the northern US city, and were met with tear gas and rubber bullets fired by police seeking to limit the damage.

Media reports said the city was requesting National Guard troops as well as police from neighboring St. Paul to help keep the peace as more protests were planned Friday over the death of 46-year-old restaurant worker George Floyd, seen as the latest in a long series of unjustified police killings of African Americans.

A bystander video taken Monday showed a handcuffed Floyd gasping for breath as a policeman pressed his knee on his neck after detaining him for allegedly using a counterfeit $20 bill in a purchase.

After at least five minutes under the policeman's knee, Floyd goes still. He was taken to hospital where he was declared dead.

Firemen continued to battle blazes Thursday morning in the busy Lake Street corridor, where more than 20 businesses were set afire.

One person was reported dead of a gunshot wound, with police investigating whether he was shot by a shop owner in the area of the most severe rioting.

Protests also took place outside the house of one of the four white police officers involved in the detention and death of Floyd, as well as at the home of Hennepin County Attorney Mike Freeman, demanding he indict the officers.

In other areas of the city protests were peaceful. At the place where Floyd was first taken into custody, people chanted and carried placards and set out bouquets as tributes.

Floyd's brother, Philonise Floyd, said on CNN that the officers, who were fired from the police department but remain free, should be arrested and charged with murder.

"They need to be arrested and held accountable about everything, because these people want justice right now."

"Justice is these guys need to be arrested, convicted of murder and given the death penalty."

Philonise Floyd said he hoped protesters would be peaceful.

"But I can't make everybody be peaceful," he said.

"But people are torn and hurting because they are tired of seeing black men die, constantly, over and over again."

Anger over Floyd's death and police treatment of African Americans also erupted Wednesday in Los Angeles, where there are longstanding tensions between law enforcement and the black community.

Some demonstrators smashed the windows of two police highway patrol cruisers, clambering on the hood of one of the vehicles. One of the protesters was injured when they fell off the vehicle as it sped away.

"This is not new, it has been going on a long time ... what our communities have known for generations, which is discriminatory implementation and enforcement of the laws," she said.

The protests evoked memories of riots in Ferguson, Missouri in 2014 after a policeman shot dead an African American man suspected of robbery, and the case earlier the same year of New Yorker Eric Garner, who was detained by police for illegally selling cigarettes and filmed being held in an illegal chokehold that led to his death.

"How many more of these senseless excessive-force killings from the people who are supposed to protect us can we take in America?" civil rights attorney Ben Crump, who was retained by Floyd's family, said Wednesday.

Crump pointed out that the arrest involved a minor, non-violent crime, and there was no sign, as police initially claimed, that Floyd resisted arrest.

"There is no reason to apply this excessive fatal force," Crump said.