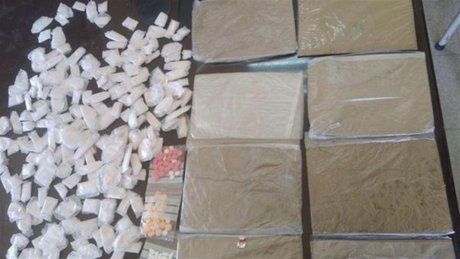 The Internal Security Forces said in a statement on Monday that it thwarted an attempt to smuggle narcotics into an inmate at Zahle prison.

The Directorate said it caught the drugs while one of the visitors on May 28, 2020 was trying to get the drugs to his brother in prison.

“While searching items sent to inmates by their families, the guards of Zahle police confiscated 870g of hashish in the form of plates, in addition to three envelopes containing 80 pills of different kinds of drugs, 201 small envelopes containing narcotic material,” said the ISF in a statement.

The assailant hid the drugs creatively inside a carton box, it added.

Investigation got underway under the supervision of the relevant judicial authorities, the ISF said.

We should get the names of the drug dealers.

SOS realy? Ali Zu3atir and his 25 brothere, cousins and half of Kizballah and what about it? If this illustrious gevernement and half the nation are not going to do about including our millitary heros what are you and I going to be able to do? cry wolf on deaf ears?

But you never know.... it could be a Norwegian !

loooool you could be right this is Kizb and they will blame it on the man on the moon.