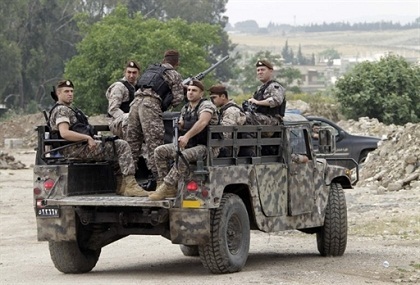 The army on Monday thwarted two attempts to smuggle foodstuffs across the Lebanese-Syrian border.

“An army unit intercepted a pickup truck in the Bekaa area of al-Misherfeh and foiled an attempt to smuggle 8,360 kilograms of fruits from Lebanon into Syria,” an army statement said.

Separately, an army unit stopped another pickup truck carrying two people who were trying to smuggle quantities of spoiled and unspoiled foodstuffs from Syria into Lebanon.

The detainees and the confiscated material were eventually referred to the competent judicial authorities.

How many did the Army let go?

They stopped fruits from enterign Syria? wow our heroes, how about Kizb mass weapons and drugs being brought in and out of Lebanon daily? or those are sacred?

Naive is a person who thinks the army and its officers are not partners in every smuggling activity. It is a means by which our 'never equalled' officers maintain their lavish lifestyles, their 3 maids, their Range Rovers, and their expensive and exquisite tase in the finer things in life.