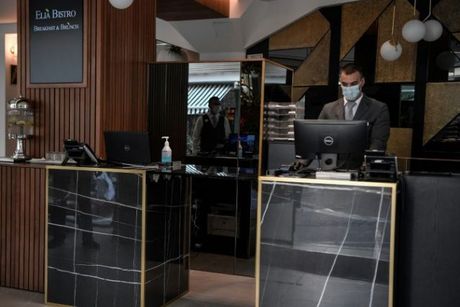 Greek hotel owners reopened Monday after a 10-week coronavirus-imposed shutdown, relieved to be back in business but anxious about how quickly customers will return.

"The hotel industry is ready -- even if it's all happening at the last minute -- to meet the new strict health protocols," said Yiannis Adamandopoulos, general manager of the Elia Ermou hotel in central Athens.

His hotel, normally open all year, was among those that reopened Monday under Greece's gradual exit from its lockdown launched on May 4.

The official tourist season in Greece starts on June 15, when those hotels only open for the season reopen and regular flights from abroad resume.

But planes will only be flying into Athens and Thessaloniki in the north -- and only from those parts of Europe that escaped the worst of the pandemic. Other Greek airports are due to open on July 1.

Tourism is a crucial part of the Greek economy, accounting for 20 percent of the country's GDP, and the lockdown hit the country hard.

This summer will be a challenge for the industry, said Adamandopoulos, with current bookings far lower than for previous seasons.

- Still an appetite for Greece -

"At the moment we stand at zero level and we have to start from scratch," said Yiannis Retsos, president of Greek Tourism Confederation.

"Everything we gain is positive, but it is still too early to say whether this will be enough for hotels and tourism businesses to be able to make it to 2021."

According to Finance Minister Christos Staikouras, the Greek recession could be as high as 13 percent this year with a recovery of around five percent in 2021.

Greece has at least been less seriously hit by the virus than many of its European partners, with 2,917 cases and 175 deaths recorded to date.

But government spokesman Stelios Petsas told journalists Monday that even as Greece opened up to international tourism again, health and safety would remain the priority.

Tourists arriving from hard-hit parts of Europe will be subjected to obligatory tests, while random testing will be in place for other incoming travelers.

Staff will be subject to regular tests, as will guests arriving for their stay, said Andreas Andreadis, director of the Sani/Ikos group. Suites have also been put aside for the quarantine of anyone testing positive for the virus.

"There is appetite for holidays from all parts of Europe," said Andreadis.

"Two thirds of our customers say they are willing to travel, but don't know if they will finally be able to.

"If the wheel starts moving and it's done safely, then I think it can move much faster than we think," he added.

Nevertheless, even in the best-case scenario, this would have to be considered a lost season.

"We have to start though, improve our image even further and prepare the ground for a very successful 2021."