Iranian Scientist Freed by U.S. Back in Iran 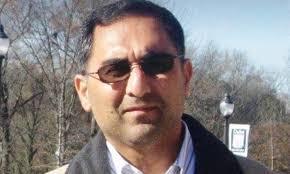 Iranian scientist Sirous Asgari has arrived back in Iran after being released from prison by its arch-foe the United States, Iranian media reported Wednesday.

The Tasnim, ISNA and Mehr news agencies all carried the same photograph on their Telegram accounts of Asgari, wearing a face mask against the coronavirus, being reunited with his family.

A U.S. court had in November cleared Asgari of charges of stealing trade secrets in 2016 while he was on an academic visit to Ohio from Tehran's Sharif University of Technology.

The 59-year-old told British newspaper The Guardian in March that the U.S. Immigration and Customs Enforcement (ICE) agency was holding him at a Louisiana detention centre without basic sanitation and refusing to let him return to Iran despite his exoneration.

Iranian foreign ministry spokesman Abbas Mousavi on Tuesday denied Asgari's release was part of a prisoner exchange and said "he was freed after being exonerated", adding that his return was delayed because he was infected with COVID-19.

"Mr. Asgari was stranded in America for a while because of (being infected with) the coronavirus and the situation with flights," he said.

The State Department has yet to respond to an AFP request to comment on his release.

However Ken Cuccinelli, the acting deputy secretary of US homeland security, said on Twitter that the US had been "trying to deport" Asgari since last year but that it had been "stalled every step of the way by the Iranian government".

Both Iran and the United States hold a number of each other's nationals and they have recently called for them to be released amid the COVID-19 pandemic.

Iran is battling what is the Middle East's deadliest outbreak of the virus, while the US has reported the highest total number of deaths worldwide from the disease.

The Islamic republic is holding at least five Americans and the US had 19 Iranians in detention prior to Asgari's release, according to a list compiled by AFP based on official statements and media reports.

Tensions between Tehran and Washington escalated in 2018, after President Donald Trump unilaterally withdrew the US from a landmark nuclear agreement and reimposed crippling sanctions on Iran.

The sworn enemies have also appeared to come to the brink of a direct conflict twice in the past year.

The most recent was in January when Iran fired a barrage of missiles at US troops stationed in Iraq in retaliation for a US drone strike that killed Qasem Soleimani, a top Iranian general.

But Trump refrained from taking any military action in response.

The two have at times swapped prisoners despite having no formal diplomatic relations.

Iran exchanged Washington Post reporter Jason Rezaian in January 2016 for seven Iranians held in the US, on the day the nuclear agreement entered into force.

In December, Iran freed Xiyue Wang, a US academic, in exchange for scientist Massoud Soleimani and said it was open to further swaps.

Americans and dual nationals currently known to be held by Iran include US Navy veteran Michael R. White, Siamak Namazi along with his father Baquer, Morad Tahbaz, Gholam Reza Shahini, and Karan Vafadari.

Most of the Iranians held in the United States are dual nationals charged with evading sanctions by either exporting goods to Iran or using the US financial system.