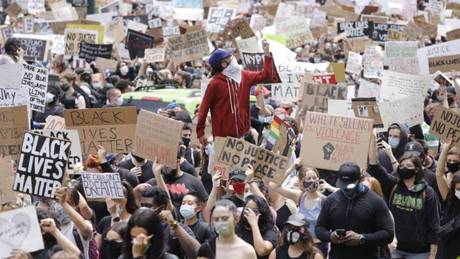 Sports stars, politicians and religious leaders have queued up to condemn the death of George Floyd, an unarmed African-American man whose killing has touched off once-in-a-generation protests across the U.S.

Here is a round-up of global reactions to his death and the demonstrations that have convulsed the United States in the past week.

The Pope decried racism over Floyd's killing -- along with "self-destructive and self-defeating" violence protests that followed across the U.S.

"We cannot tolerate or turn a blind eye to racism," he said Wednesday of Floyd's killing.

He was not the only religious leader to speak out. Iran's Ayatollah Ali Khamenei also chimed in -- with a more political message.

"It is the true face of America, it's what it has always done all over the world -- in Afghanistan, Iraq, Syria and other countries, and before that in Vietnam."

From Dublin to Wellington to Paris, thousands gathered for protests this week in solidarity with the U.S. demonstrations.

In the French capital, some 20,000 protesters were out on the streets Tuesday, marching against the 2016 death of a black man, Adama Traore, in French police custody -- and galvanized by the U.S. demos.

What started out as a campaign among music industry executive quickly swept across social media, with stars from Rihanna, Drake and Kylie Jenner posting a stark black square to their Instagram feeds on Tuesday with the hashtag #BlackOutTuesday.

The campaign initially called for music industry employees to take a day off work in solidarity with anti-racism protests, but mushroomed across the internet.

Reporters have been the target of some protesters -- and police -- prompting calls to protect journalists trying to do their jobs.

Australian diplomats are investigating after two reporters were assaulted live on air by police who clubbed reporter Amelia Brace with a truncheon and hit cameraman Tim Myers with a riot shield and punched him in the face.

Russia also said one of its journalists had been hurt in the protests, the foreign ministry demanding "urgent measures to prevent journalists from becoming targets of police impunity."

The U.S. suffered from "inequalities in health, education, employment and endemic racial discrimination", she said.

"This is an abuse of power and this has to be denounced, has to be combated, in the States and everywhere," he added.

And in Britain, Prime Minister Boris Johnson joined the condemnation, saying: "I think what happened in the United States was appalling, inexcusable."

- 'No fear' from Europe's footballers -

England international Jadon Sancho displayed a T-shirt with "Justice for George Floyd" written on it on the weekend. "We shouldn't fear speaking out for what's right," said the footballer.

As similar gestures spread around Europe -- many players "taking a knee" during training sessions -- officials were forced to open probes because the international rulebook bans players from showing political messages.

But Gianni Infantino, president of world football's governing body FIFA said: "For the avoidance of doubt, in a FIFA competition the recent demonstrations of players in Bundesliga matches would deserve an applause and not a punishment."

Other sports stars were also keen to vent, F1 driver Lewis Hamilton telling his fans on social media he was "completely overcome with rage at the sight of such blatant disregard for the lives of our people."

Why doesn’t the Pope revoke Rahi’s privileges ? The cardinal-patriarch is an active participant in the Lebanese corruption, he picked his side years ago.