America's Curfews: Controversial, but are they Effective? 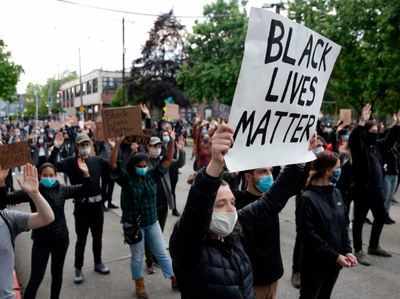 Violent protests over the death of a black man in police custody led several US cities to impose curfews, but do they help maintain order or merely further antagonize demonstrators?

The demonstrations were sparked by the killing of George Floyd, who suffocated on Monday last week when Minneapolis police officer Derek Chauvin knelt on his neck for nearly nine minutes.

America's worst civil unrest since the 1960s ensued, and saw New York -- the fabled "City that Never Sleeps," already reeling from the coronavirus -- impose its first curfew in almost 80 years.

Widespread looting, arson and clashes between police and protesters led authorities to also introduce ad hoc curfews across a host of other cities, including Washington DC, Los Angeles and Chicago.

For Dennis Kenney, an expert in criminal justice at the John Jay College of Criminal Justice, part of New York's City University, a curfew is a "balancing act."

"The idea is not to interfere with people's ability to protest, to demonstrate, to express their frustrations, to have their say," he told AFP.

"But it is to create a tool... so that the police have the ability to intercept them beforehand and prevent them from doing the sorts of activities that we obviously all are opposed to."

New York had not used such a measure since August 1943, when the historically black neighborhood of Harlem was placed under a strict curfew for three days following riots.

That rioting was also sparked by police brutality: a white police officer shot and wounded a black soldier called Robert Bandy after he intervened in the arrest of a black woman, according to reports at the time.

As tensions soared over the weekend, Atlanta, Philadelphia, Los Angeles and Chicago announced on Saturday that they were introducing the extreme measure of nighttime curfews.

Minneapolis, where Floyd was killed and the epicenter of the violence, had already introduced one.

Washington DC followed suit on Sunday, with New York announcing its own the following day.

Authorities said the curfews were not intended to curtail people's right to protest -- as protected by the First Amendment -- but to crack down on violence and looting which was generally taking place after dark.

New York Mayor Bill de Blasio -- who is white, and whose 25-year-old mixed-race daughter was briefly arrested during a protest Saturday -- initially rejected the idea of a curfew.

But he reluctantly came round to the idea after two nights of intense looting.

After an 11:00 pm to 5:00 am curfew on Monday failed to deter looters, he imposed one starting at 8:00 pm on Tuesday and took the unprecedented measure of extending it until Sunday.

"They're not very efficient," Kenney said of curfews.

In New York, Washington and other cities, hundreds of protesters defied them.

In many cases, police opted not to arrest peaceful offenders, for the sake of appeasement.

Kenney says police don't expect curfews to be respected, but they become "an effective tool when the goal is to prevent the protest turning into a riot, or to prevent groups or individuals that are looting."

He says the problem with using it for too long is that "at some point, people begin to feel it is oppressive, that their rights broadly are being violated and the curfew itself becomes something to resist against."

In New York this week, demonstrators have shown what they think of the curfew by chanting profanities about it.

Jasmon Bailey, a sociologist at the University of Maryland, believes curfews don't solve the reason for the unrest and can in fact compound the original problem by giving officers extra powers for arbitrary arrests.

He says police can use it to selectively arrest more blacks than whites, noting that anti-confinement protesters during the coronavirus pandemic were overwhelmingly white and did not have their right to protest curtailed.

Bailey argues that curfews focus attention on the looting, rather than the "racial injustices" that the demonstrators are campaigning against.

"It is targeting people... not the system," he told AFP.

Whether curfews are fair, or effective, or neither, one point experts and authorities agree on is that they should be short.

A lengthy one could be subject to legal challenges.

"It's the right thing to do for just a few days," said de Blasio.