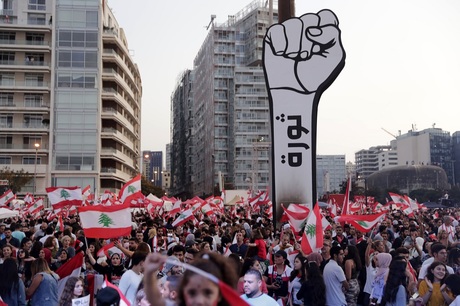 Logistical preparations began a day earlier for demonstrations taking place Saturday, in which the Kataeb party and supporters of former Minister of Justice Ashraf Rifi and other protesters demanded early parliamentary elections.

The Lebanese party and al-Mustaqbal movement said their supporters are free to either join the demos or not, meanwhile the Progressive Socialist Party and the Free Patriotic Movement announced non-participation.

The banners are demanding early parliamentary elections, some raising the slogan of "no confidence", as well as demanding "the return of looted funds and fighting the corrupt and corruption."

Lebanon reels under a crippling economic crisis, the pressure of high prices of goods and the devaluation of the Lebanese currency.

Several political parties, like the PSP, announced that they “have nothing to do with today’s movement.”

Meanwhile, LF media and communication official, Charles Jabbour said: “The LF will not invite partisans and supporters to participate or not, leaving it to their own freedom of choice in order not to politicize the cause of the demonstrations and the revolution. The ruling authority wants to deliberately fabricate politicization claims in order to foil the revolution.”

However, he affirmed that the “LF supports the movements. People have no choice but to demonstrate because of the great failure in managing the state and getting Lebanon out of this tragic collapse that we have reached.”

The Kataeb’s position regarding Hizbullah’s arms “are known to all,” emphasized Dagher. But he noted that demands to remove Hizbullah’s arms through the implementation of UN Resolution 1559 at this timing aims to disrupt the demonstrations. “This is the work of the intelligence and Hizbullah’s work,” he said.

MP Mario Aoun, of the Free Patriotic Movement-led Strong Lebanon bloc said that the reasons for their non participation “is clear,” and that the demos aim to topple the FPM-backed ruling authority.