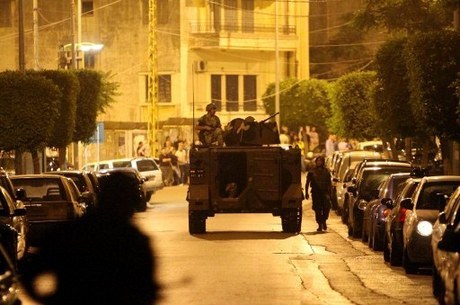 A stone-throwing clash erupted Saturday evening between young men from the Beirut suburbs of Shiyyah and Ain el-Rummameh, amid tensions in the country linked to an anti-government protest that was organized in the center of the capital.

"A large force from the army and General Security separated between the two sides and restored calm," the National News Agency said.

LBCI TV said no injuries were recorded, noting that gatherings were still present in the area despite the return of calm.

Military sources meanwhile denied to al-Jadeed TV reports claiming that the army had fired in the air to contain the situation.

There is historic rivalry between the two neighborhoods, which had witnessed the first incidents of the 1975-1990 civil war.

The clashes had been preceded by days of mobilization and polarization on social media and through media outlets, after it became known that the controversial issue of Hizbullah's arms would be tackled by the protesters.

Some groups and activists of the October 17 uprising opted not to take part in the demo over perceived politicization.

Some political parties such as Kataeb, the Lebanese Forces and ex-minister Ashraf Rifi had openly voiced support for the demo. The Sabaa Party and reportedly supporters of Bahaa Hariri also participated in the protest.