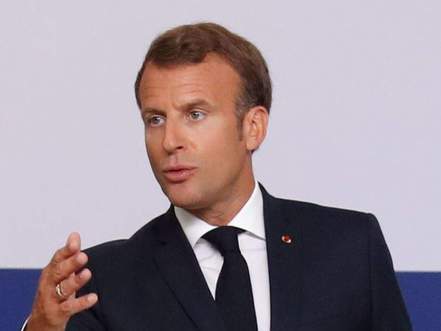 French President Emmanuel Macron travels to Britain on Thursday for talks with Prime Minister Boris Johnson, a hugely symbolic visit and his first foreign trip since the coronavirus pandemic began.

Macron's visit will mark 80 years since exiled wartime resistance leader Charles de Gaulle made his famous call to a defeated France from London not to give into the Nazis.

Harking back to de Gaulle's dramatic appeal on June 18, 1940 from BBC studios will give Macron a chance to underline the importance of Anglo-French relations even after Brexit.

But beyond the historic symbolism, Macron's meeting at 10 Downing Street with Johnson will also focus on the grinding search for an agreement on Britain's exit from the EU.

Britain, which left the EU in January, is negotiating a trade deal to govern relations after December 31, when it stops abiding by EU rules. Macron has on occasion expressed impatience with the drawn-out Brexit process.

In a sign of the tensions in the talks, Foreign Minister Jean-Yves Le Drian said in an interview with the French daily La Croix to be published on Wednesday that he still did not rule out a "no deal" scenario.

He said the UK might not have "understood the full magnitude of their withdrawal".

Macron's status as a visiting foreign dignitary will spare him the controversial two-week virus quarantine now demanded by the British authorities of all visitors from abroad.

Before heading to Britain, he will take part in the traditional annual ceremony at Mont Valerien outside Paris, a memorial for the French who fought against the Nazis and those who were killed by the occupying forces.

He will then meet heir to the throne Prince Charles in London, with both set to pay their respects to de Gaulle and make speeches.

Macron will award the Legion of Honour to London, making it the seventh city to be decorated with France's highest order of merit, after Algiers, Belgrade, Brazzaville, Liege, Luxembourg and Volgograd.

He will then head to Downing Street for the talks with Johnson, himself an avowed fan of Britain's wartime leader Winston Churchill who allowed de Gaulle to broadcast from the BBC.

"The struggles we face today are different to those we confronted together 80 years ago," said Johnson.

"But I have no doubt that -– working side by side -– the UK and France will continue to rise to every new challenge and seize every opportunity that lies ahead."

Macron, who displays de Gaulle's war memoirs on his desk in his official photograph, is making much of 2020 as an anniversary year for the French resistance leader who would later become president of post-occupation France.

In May, he paid tribute to de Gaulle at the site of the 1940 Battle of Montcornet, one of few effective counter-attacks by French soldiers against the Germans and where de Gaulle made his name as a military commander.

On November 9, Macron is to mark the 50th anniversary of the general's death by visiting his final resting place in Colombey-les-Deux-Eglises, eastern France.

De Gaulle's iconic stature and his defiant wartime spirit are being tapped into even more during the unprecedented challenges posed by the epidemic.

In a telling reflection of his status, the vandalisation of a bust of the general in northern France this week was met with a torrent of outrage.

The London statue of Churchill that was controversially boxed up after anti-racism protests will be uncovered for Macron's visit, the mayor's office said.

In his radio broadcast from London, de Gaulle urged all those who could to carry on fighting for France, words that laid the foundation of the resistance movement and helped keep alive hope that France would be liberated, as it finally was in 1944.

"Has the last word been said? Should hope disappear? Is the defeat final? No! Believe me, I... tell you that nothing is lost for France," he said.