One Conflict, Two Museums: How the Korean War Still Divides the Peninsula 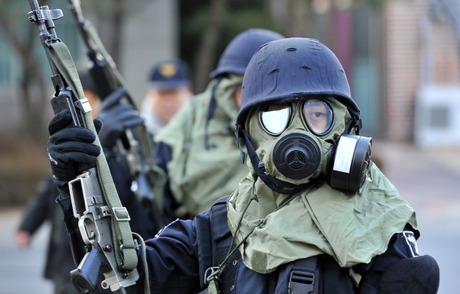 In the capitals of the two Koreas, flagship museums offer radically different accounts of the same conflict -- the war launched to unify the peninsula but that now defines its division.

In Pyongyang, a giant statue of a North Korean soldier holding aloft a flag stands in front of the museum to the Victorious Fatherland Liberation War, as the conflict is known in the country.

An enormous stone tablet stands nearby, engraved with the handwriting of the North's founder Kim Il Sung, grandfather of current leader Kim Jong Un, proclaiming that his forces' "heroic achievements shall shine for ten thousand generations".

In Seoul, metal plaques lining the wall of the War Memorial of Korea list more than 190,000 South Koreans and members of the US-led United Nations coalition "who died defending the Republic of Korea".

Both museums feature monumental statues of combatants and civilians engaged in the struggle.

The war began 70 years ago on Thursday, when North Korean forces poured across the 38th parallel, where Moscow and Washington had divided the peninsula -- then a Japanese colony -- in the closing days of the Second World War.

The North insists to this day that it was attacked first by the United States and its South Korean "puppets".

After two days of "preliminary bombardment", said guide Choe Un Jong at the Pyongyang museum, "the enemies intruded one or two kilometres into our country".

"Our Korean People's Army frustrated the enemy's surprise attack and immediately they turned over to the counter-offensive."

But historians have found extensive documents in Soviet archives on Kim's requests for permission to invade from his main backer Joseph Stalin, and the planning for the operation.

And at the Seoul museum, curator Go Hanbin was dismissive.

"No one else in the world but the North is making such a claim," he said. "The war stemmed from their drive to unify the whole Korean peninsula under the communist regime."

North Korean forces took Seoul in just three days as the South's ill-equipped army crumbled, and pressed on almost to victory before the defenders turned the tide with the Incheon Landing, recapturing Seoul and advancing rapidly northwards.

Pyongyang fell in October and the South and UN coalition advanced almost to the Chinese frontier -- the North calls it a "temporary strategic retreat" on its part.

Seoul fell again, before being recaptured once more as the conflict settled into a war of attrition, accompanied by saturation US bombing of the North.

Two halls at the Pyongyang museum are dedicated to the Chinese contribution, but guide Choe said their efforts were "not decisive".

The armistice that ended hostilities in 1953 along a line not far from the original 38th parallel, after millions of deaths, is portrayed as the defeat of the US.

Jon Gu Kang was a military doctor during the war and later rose to become the North's first woman general. She met Kim Il Sung on five occasions and was 88 when she spoke to AFP at the museum in 2017.

"The United States have been our sworn enemies for a century and my blood runs cold thinking about them," she said. "We cannot live under the same sky."

For the North, the war is a key element of its national identity and the claim to legitimacy of Kim Il Sung and his descendants: that he defeated two of the great imperialists of the 20th century -- Japan and the US -- within a generation to secure and defend Korea's independence.

As such, analysts say, it is crucial for Pyongyang to maintain the narrative that it was attacked first.

"If you admit that you were not attacked, that you wanted to liberate the South and you failed it would make the war what it actually was," said Andrei Lankov of Korea Risk Group, "an unnecessary, bloody disaster".

"But if you keep insisting that you were attacked and you held your ground, you are not an unlucky adventurer who created a mess, but a heroic winner who won the war fighting foreign aggression."

Pyongyang still proclaims reunification as its objective, and has spent decades developing a nuclear weapon and ballistic missile arsenal -- at the cost of international isolation and multiple sets of sanctions.

It says it needs the weapons to deter any US invasion.

The conflict was "definitely, unconditionally" more important to the North, said Lankov, where it was "part of the foundation myth".

Attitudes in the South are more mixed.

The South defines itself far more by what it is today: an established democracy after it overturned decades of military rule, the world's 12th-largest economy, technologically advanced, and a double Olympic host.

"South Korean people mostly perceive the Korean War as one of many historical events," said curator Go at the War Memorial in Seoul.

"A long time has passed since the war" and some visitors criticise the museum for a "narrow perspective" on South Korean victories, he added.

Outside his museum stands a statue of the Park brothers, who fought on opposite sides but recognised each other at the battle of Wonju and embraced.

A plaque says: "The statue expresses reconciliation, love and forgiveness."