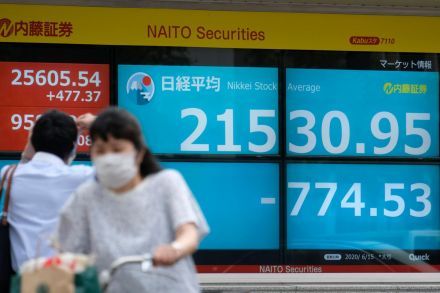 A sharp rise in fresh virus infections in the United States and elsewhere sparked a hard sell-off in equities Thursday, following hefty losses on Wall Street and in Europe.

Concerns about a possible trade battle between Washington and Europe added to the downbeat mood on trading floors, with a warning from the International Monetary Fund over the global outlook also souring sentiment.

A three-month surge across world markets, supported by the easing of lockdown measures and a wall of government cash, is showing signs of stalling as the killer virus sees a resurgence and raises questions about the pace of reopening.

A key worry is the US, where dozens of states including Texas, Florida and Arizona have seen infections spike in recent days.

Some US officials who loosened restrictions on business, dining, public gatherings and tourism are now urging residents to again stay home.

Disneyland, near Los Angeles, delayed its planned July 17 reopening without announcing a new date for the world's second-most visited theme park, while Apple and Nike have closed stores that had recently reopened.

The issue had become serious enough for New York, Connecticut and New Jersey to announce they will impose a 14-day quarantine on people arriving from areas with high infection rates.

Elsewhere, Australia's military announced it would send 1,000 troops to Melbourne to help contain the country's only significant outbreak over fears of a second wave.

And in Europe, around 640,000 people in two German districts were facing new containment measures after an outbreak at a slaughterhouse.

Experts warn that an early summer heatwave across Europe could lead to a surge in infections as people hit beaches and parks while ignoring social distancing measures.

"Clearly the market really got the shivers over the prospect of a big increase in COVID and maybe starting to see places that were opening up have to close up, pressing the economy and lowering the prospects for the stock market," Margie Patel, at Wells Fargo Asset Management, told Bloomberg TV.

"We've had such a great run from the end of March it's only inevitable that we should get at least a little step back on the way to higher prices over the course of the year."

Sydney dived 2.3 percent, while Tokyo, Seoul, Singapore, Manila, Jakarta, Bangkok and Wellington were all down more than one percent

Mumbai, however, edged up slightly, while Hong Kong and Shanghai were closed for holidays.

The financial devastation wrought by lockdowns was laid bare Wednesday by the IMF, which said the crisis would shrink the global economy by 4.9 percent this year and wipe out a mind-boggling $12 trillion over two years.

Adding to the uncertainty was news that the US is considering tariffs on $3.1 billion in European imports as part of a dispute over subsidies to plane manufacturer Airbus.

That came just days after the European Union indicated it plans to press ahead with a digital tax that would primarily hit US tech firms.

Trade officials listed products from France, Germany, Spain or Britain, ranging from olives to decaffeinated coffee, as possibly subject to the new levies.

But while the development -- which comes on top of growing concerns about US-China tensions -- is a worry, AxiCorp's Stephen Innes said the spike in infections was crucial.

"It is worth noting the US administration's proclivity to walk-back trade frictions," he said in a note.

"Recent history suggests (Donald Trump) can and will react to negative news that adversely impacts the stock market, and which is within the White House control.

"By contrast, stemming the negative market impact of rising COVID-19 cases is difficult for policymakers to control."

He added that markets were unlikely to break higher until consumer confidence returned.

The shift away from risk assets saw the dollar rise against higher-yielding currencies with the Australian dollar and Mexican peso down around one percent.

Shanghai - Composite: Closed for a holiday