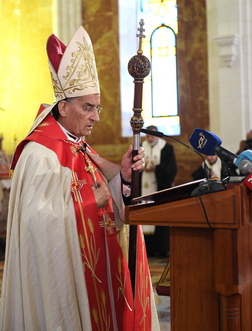 Turning to the issue of the controversy over the judicial ruling against the U.S. ambassador, al-Rahi reminded of “the freedom of expression that characterizes Lebanon in its region.”

“It was enshrined in the constitution and the Universal Declaration of Human Rights, whose preamble was devised by Dr. Charles Malek of Lebanon during his chairmanship of the U.N. General Assembly in 1948,” the patriarch said in his Sunday Mass sermon.

“We very much regret yesterday’s judicial ruling which banned a diplomatic figure representing a world power from the right to express opinions,” al-Rahi added.

Decrying that the ruling “was issued during a (judicial) holiday contrary to legal norms,” the patriarch said the move “tarnished the image of the Lebanese judiciary and violated the constitution.”

“It requires condemnation and must be rectified,” al-Rahi urged.

During an interview with Saudi-owned news channel Al-Hadath aired on Friday, U.S. Ambassador Dorothy Shea said the United States has "grave concerns about the role of Hizbullah," labeling it as "a designated terrorist organization."

"It has siphoned off billions of dollars that should have gone into government coffers so that the government can provide basic services to its people," she said. "It has obstructed some of the economic reforms the Lebanese economy so desperately needs," Shea added.

Judge Mohammed Mazeh, the urgent matters judge in the southern city of Tyre, sparked a storm of controversy after he issued a ruling banning local and foreign media working in the country from airing or publishing any comments by Shea for a one-year period.

In his order, Mazeh accused Shea of promoting internal sedition and strife and of inciting the Lebanese against each other.

Is it the first time this person got it right?