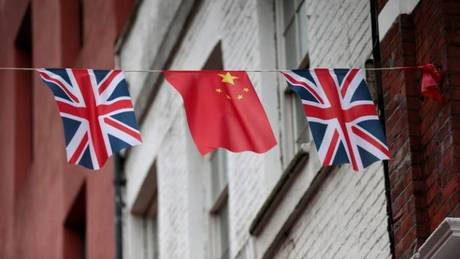 China warned Britain on Thursday it could retaliate with "corresponding measures" for London's decision to extend a broader path to citizenship for the residents of Hong Kong.

Britain's offer came in response to a sweeping new security law that China unveiled for the former British territory this week.

Hong Kong was under UK jurisdiction until it was handed over to China in 1997 with a guarantee that Beijing would preserve the city's judicial and legislative autonomy for 50 years.

The Chinese embassy in London stressed that "all Chinese compatriots residing in Hong Kong are Chinese nationals".

The British plan covers almost three million Hong Kongers who either have a British National Overseas (BNO) passports or are eligible to apply for one.

The embassy said these people were Chinese nationals as well.

"If the British side makes unilateral changes to the relevant practice, it will breach its own position and pledges as well as international law and basic norms governing international relations," it said in a statement.

"We firmly oppose this and reserve the right to take corresponding measures," it said without elaborating.

The Chinese statement concluded by urging London to reassess its decision and "refrain from interfering in Hong Kong affairs in any way".

Britain had sought closer relations with China after ending its decades-long membership in the European Union this year.

But Britain is now studying ways it can cut Huawei out of its system entirely and build up an alliance of European and Asian providers that reduces China's dominance in the field.

UK media said the Foreign Office summoned the Chinese ambassador to London on Wednesday to express its concerns about the law.

Foreign Secretary Dominic Raab later conceded there would be little London could do if China refuses to allow Hong Kongers to relocate to Britain.

"Ultimately, if they follow through on something like that there would be little that we could do to coercively force them," Raab told ITV television late Wednesday.

Raab said London could use "diplomatic leverage (and) other ways" to try to soften China's approach to Hong Kong and not follow through on the full force of the sweeping new security law.

Chinese authorities arrested 10 people under the new legislation during protests Wednesday marking the anniversary of Hong Kong's return to China.

"But ultimately we need to be honest that we wouldn't be able to force China to allow BNOs to come to the UK," Raab said.

If Xi is really not happy to let dissident HKer's flee to England, he is mishandling this.

I like China!! Portugal prefer the China money then the Whaabi money!!

Perhaps you should try and bring pressure on the Portuguese government to allow the Uighur moslems to emigrate to the country. Of course, all Macao residents should also be allowed to return to the motherland.