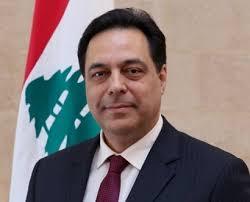 Prime Minister Hassan Diab criticized what he said are “currency manipulation” driving the uncontrolled devaluing of the Lebanese pound, and indirectly lashed out at recent diplomatic activity of foreign ambassadors in Lebanon.

“For the sake of friendships and (good) relations, we maintained silence on a lot of diplomatic practices largely breaching international norms, but this behavior surpassed fraternal and diplomatic relations,” said Diab at the beginning of the Cabinet meeting at the Grand Serail.

“Some local and foreign sides want to besiege the Lebanese and involve Lebanon in the regional conflicts,” he added.

Criticizing the rising rate of the dollar to the Lebanese pound, he said: “The dollar game is exposed now, they demand us to enforce reforms but in turn provide cover for the corrupt and prevent us from having access to the files of stolen funds.”

Has the friends of Hariri that stolen the funds to Lebanon!!!???

Diab is trying to deflect his miserable failures. What an underachiever...

The Hassan Diab government scorecard so far, 0% achievements - 100% finger-pointing. Almost all the decisions his government took it turn around and reversed after pressures from Hezbollah and the FPM. Hassan Diab is going down as the second worst prime minister Lebanon has ever had, second only to the all time worst prime minister and the all time worst president of Lebanon, his president, Michel Aoun.

Why doesn't he actually do something instead of blaming everyone for his mismanagement? The negotiations with the IMF failing are his fault because they NEED TO MAKE REFORMS, and he and his kizb backup are hoping for free handouts.

Guess what, you have been exposed. No more free money to the political class from the outside any more. DEAL WITH IT.

Monarchies whaabis wants to destroy political the catholics in Lebanon, they want to destroy the only Cristian state in all Arab world

DIAB must go with this lousy government.