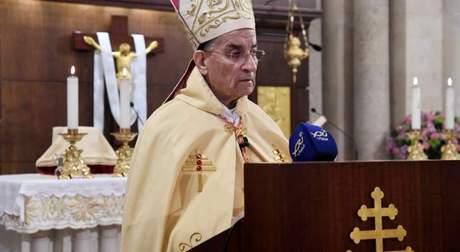 Maronite Patriarch Beshara al-Rahi on Sunday called on President Michel Aoun to break what he called the siege that is imposed on Lebanese “legitimacy” and the country’s “free national decision.”

In his Sunday Mass sermon, al-Rahi also urged friendly nations to “scramble to rescue Lebanon, the same as they used to do whenever it faces a threat.”

“We call on the United Nations to work on reinforcing Lebanon’s independence and unity, implementing U.N. resolutions and declaring its neutrality,” the patriarch added.

He said Lebanon’s “neutrality” would be “a guarantee for its unity and historic alignment in this period that is rife with geographical and constitutional changes.”

“Lebanon’s neutrality is a strength and guarantee for its role in the region’s stability and in defending the rights of Arab countries and the cause of peace, as well as in the sound relation between Middle Eastern countries and Europe in light of its location on the shores of the Mediterranean,” al-Rahi went on to say.

Too little too late Patriarch... You are nothing like Patriarch Sfeir. You used to blame embassies for giving out visas for our young to emigrate... You should have been blaming this government and its support to Hizbullah instead. That is what brought us to here... Just stick to religion.