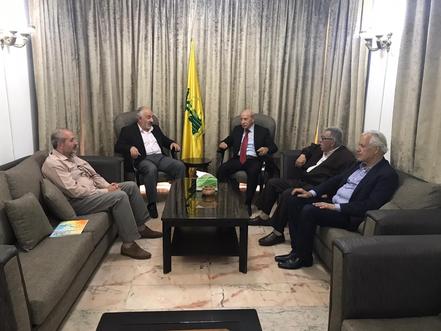 Lebanon's Hizbullah and the Palestinian Hamas on Monday said Israel's plan to annex parts of the West Bank is an "aggression against the Palestinian people" and called for unity to confront it.

Hamas leader Ismail Haniyeh sent a letter to Hizbullah chief Sayyed Hassan Nasrallah in which he said that the Palestinian cause is facing "grave dangers," according to a statement released by the Lebanese group.

Israeli Prime Minister Benjamin Netanyahu has vowed to annex up to 30% of the occupied West Bank in line with U.S. President Donald Trump's Middle East plan, which overwhelmingly favors Israel and was rejected by the Palestinians.

But the move appears to be on hold at the moment, as Israel grapples with a renewed coronavirus outbreak and awaits a final green light from Washington. Israel also faces heavy opposition from the international community and some of its closest allies.

"The Palestinian people are capable of confronting this plan," the Hizbullah statement said. It called on Arab and Muslim nations and "free people of the world to quickly move to stop the occupation's continuous aggression against the Palestinian people."

Both Hizbullah and Hamas have fought several wars with Israel over the past decades. The United States and the European Union view both as "terrorist" groups.

Do you honestly believe that Israel really takes any notice about what Hizballah and Hamas think?