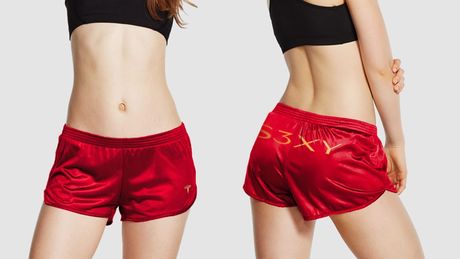 Tesla founder Elon Musk is ruthlessly mocking the carmaker's doubters who sell the company short by selling short shorts with the company logo.

Musk on Sunday followed through on a threat made last week by offering red satin shorts for sale on the company website -- which promptly crashed from the volume of orders or perhaps mere curiosity.

"This item is out of stock," the Tesla site says, above the description of the athletic wear.

The irascible Musk, a frequent Twitter user, has regularly battled with skeptical investors who believe the company is overpriced and short Tesla stock, placing bets that the shares will fall.

Instead, last week Tesla raced ahead of Toyota to become the world's biggest carmaker by market capitalization, prompting Musk to announce plans for the new product, featuring the company logo in gold on the front, and "S3XY" across the back -- a play on words as well as a reference to Tesla models S, 3, X and Y.

"Dang, we broke the website," Musk tweeted Sunday afternoon about the shorts, which he promised to gift to market regulators at the Securities and Exchange Commission, a regular target of his jabs after repeated clashes over his tweets.

"Will send some to the Shortseller Enrichment Commission to comfort them through these difficult times," he said last week.

Shares in the electric carmaker jumped another 10 percent in early afternoon trading Monday, revved up by last week's news it produced more than 82,000 vehicles and delivered approximately 90,650 in the recently ended quarter despite production being disrupted due to the coronavirus epidemic.

"Celebrate summer with Tesla Short Shorts. Run like the wind or entertain like Liberace with our red satin and gold trim design," the website says in the description of the new product.

The company still sells only a fraction of the vehicles sold by traditional automakers, yet it has captivated investors' imaginations as a bet on the future.

Musk, who turned 49 years old last month, is seen as a visionary and inventive boss who has challenged conventional wisdom while trying to shift the industry towards electric cars.

But he also is considered highly unpredictable, and fraud charges stemming from a Musk tweet once cost him and the company $20 million, and included a requirement that his social media use be supervised by Tesla.