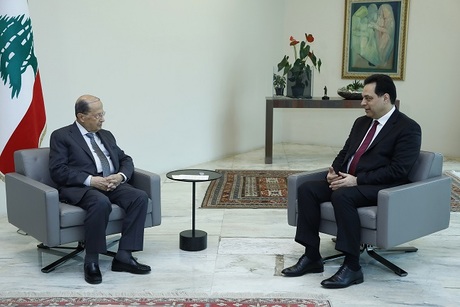 President Michel Aoun on Tuesday stressed the need to audit the accounts of the central bank, describing such a move as “an essential element for studying the financial and monetary situations at Banque du Liban.”

“It also has great importance in the negotiations with the International Monetary Fund,” Aoun added during a Cabinet session.

Prime Minister Hassan Diab for his part said that he sees a “growing ray of hope.”

“I believe that, within weeks, the Lebanese will sense the outcome of the efforts we made over the past period,” he said.

“Our bet is on the strong will of the Lebanese, on the success of the government’s plan and on the support and assistance of Arab brothers who have refused to abandon Lebanon,” Diab added, citing the recent visit of an Iraqi ministerial delegation.

“There will be a quick follow-up with the brothers in Iraq in order to reach the required results as soon as possible,” the premier went on to say.

Referring to a plan to subsidize essential foodstuffs that will be announced later in the day, Diab described it as “the cornerstone for addressing the crisis of the hike in prices.”

“Its results must be quick and follow-up must be accurate and around the clock to prevent its failure and forbid merchants from distorting its objective,” the PM added.

He also said that “despite the black smoke that some are insisting on spreading in the country to block roads, pollute everything, poison people’s lungs and attempt to poison their ideas, there is hope to overcome the severe crisis.”

These 2 are dreaming in multi color!!!

Not that those in charge of BDL are angels, but BDL’s job is to provide government with money which it then spends. Audit government’s spending is where the focus should be.
Enough with كيديّة سياسيّة , you don’t have what it takes to bring Salameh down, period.
If you somehow manage to succeed, على لبنان السلام.

A ray of hope to cover up the illicit wire transfers worth billions of dollars they did over and over .