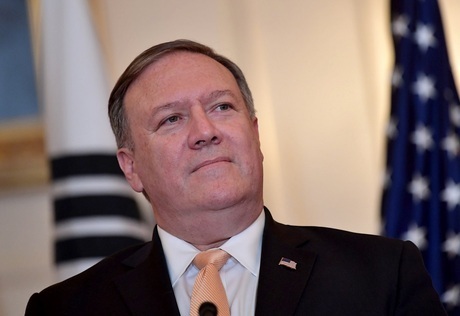 US Secretary of State Mike Pompeo reiterated in remarks from Washington that the United States is supporting Lebanon as long as it succeeds at imposing reforms and its government is not controlled by Hizbullah.

Pompeo assured during a press conference on Wednesday at the State Department the US support against “terrorist Hizbullah.” He said the US is supporting Lebanon “to be a country that is not subordinate to Iran.”

Iran-backed Hizbullah is classified as a terrorist group by the United States and many other countries.

He added that the US is “trying hard to prevent Iran from selling crude oil to Hizbullah.”

On the release of Lebanese businessman Kassim Tajideen, accused of providing millions of dollars to Hizbullah, Pompeo pointed out that the US “will always deal with Hizbullah as a terrorist party.”

True, but watch his party tear at the seams in near future

The Zionist paid political prostitute Pompeo does not represents The “west”. He represents the Israeli enemy. He is selected to please Netanyahu. The IMF cannot lend a dime without US approval. So the US is just isolating itself. There is a tariff war between the US and the EU.

Could we please have your, what must now be very short, list of those who are not "political prostitutes representing Israel"
Every time a politician says something in support of the Republic of Lebanon and against the Hizballah terrorists, in your opinion he is a "political prostitute representing Israel"
Get off your high horse and begin to understand that there are actually politicians around the world (believe it or not, within Israel as well) who really want that Lebanon begins to stand on its own two feet without any organisation trying to undermine it from within.

March to Baabda and wave the Zionist flag. In your dreams only.