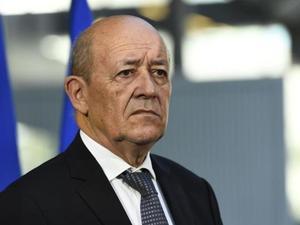 French Foreign Minister Jean-Yves Le Drian urged Lebanese authorities to initiate reforms in order to obtain financial support from the "international community" and save Lebanon’s crumbling economy from collapse, indicating that he will visit Beirut “within days,” media reports said on Thursday.

"Today there is a risk of collapse. The Lebanese authorities must regain control, allow me to tell our Lebanese friends: We are really ready to help you, but help us to help you,” Le Drian said in comments in the French Senate on Wednesday.

"I am very worried about the situation. Worried and sad. Half of the Lebanese population lives below the poverty line. There were commitments made by the Lebanese authorities. These reforms are not there," stated the official.

Le Drian added saying that the government of PM Hassan Diab pledged to carry out a series of reforms within the “100-day deadline since it gained confidence. But these reforms were not made. We know well what should be done regarding transparency, regulating the electricity sector, fighting corruption, and reforming the financial and banking system."

Le Drian also said at the Senate Foreign Affairs Committee that "it is absolutely clear that all political partners have insufficient awareness of the risk of collapse."

He stressed that "France and the international community will not be able to do anything if the Lebanese do not take the initiatives that are essential to their recovery."

Le Drian also said at the Senate Foreign Affairs Committee that "it is absolutely clear that all political partners have insufficient awareness of the risk of collapse."

Sums it up well.

..."all political partners have insufficient awareness of the risk of collapse." u are wrong they have full knowledge..

IF z country will collapse, then no one can or will go after them asking about z embezzled money they put outside...

Do these foreign politicians not understand that the current political class in Lebanon has no intention whatsoever to implement any reforms? They just want the money.