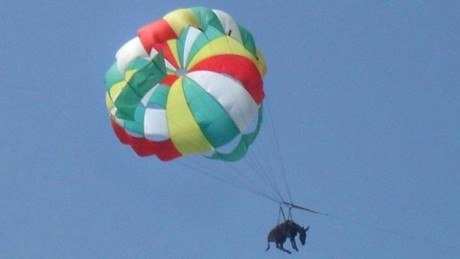 A donkey that last summer shot to international fame after being forced to parasail above the beaches of southern Russia has died of a heart attack, her minders said on Saturday.

A veterinarian said the heart attack was likely the result of stress brought on by the experience, which sparked an international outcry from human-rights activists and a campaign by a British tabloid to rescue the beast.

The female donkey named Anapka made headlines worldwide and attracted the attention of local police after beachgoers in Russia's southern village of Golubitskaya were stunned when they saw a braying, apparently terrified donkey soaring in the blue skies over the Sea of Azov.

The donkey was attached to a parachute pulled by a speedboat and was in the skies as a result of an impromptu advertising campaign by several entrepreneurial Russians to attract beachgoers to indulge in the thrill of parasailing.

The donkey died last month at stables just outside Moscow where she ended up after her heart-wrenching ordeal, her minders said.

Anapka was old but looked healthy and was very quiet when she arrived in the stables in the fall, Yulia Dobrovolskaya, the stables' manager, told Agence France Presse. Soon after, she began to refuse food and water.

"She got sick in December. She became very weak," said Dobrovolskaya, adding that vets had to force-feed her for more than a week before she died.

A veterinarian who examined the donkey said she was probably around 40 years old but the most likely cause of death was a heart attack.

"An autopsy showed she died from myocardial infarction," said Dobrovolskaya, chalking up her illness to the stress endured during her parasailing experience.

"A young animal may recover but for an old one there is no way back," said Dobrovolskaya, a veterinarian by training.

Local media said in the summer the donkey was so high in the sky the children on the beach cried and asked their parents why a dog was tied to a parachute.

"The donkey landed in an atrocious manner: it was dragged several meters along the water, after which the animal was pulled out half-alive onto the shore," local newspaper Taman said at the time.

The July stunt aroused a storm of protest from animal-rights activists including French actress Brigitte Bardot who wrote to President Dmitry Medvedev.

The animal became the subject of British tabloid hysteria and The Sun published a series of stories saying it tracked down the poor animal and rescued it from its owner.

The tabloid's journalists moved the animal to an elite Kremlin-connected equestrian school before Anapka found a final home at Dobrovolskaya's stables.