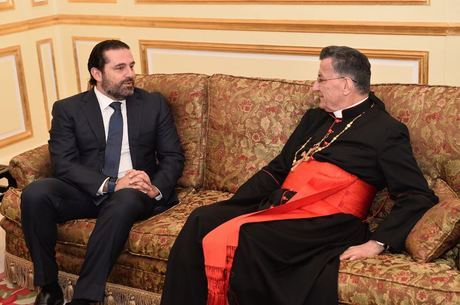 Former Prime Minister Saad Hariri said Thursday that Lebanon is going through its worst economic crisis in history and that the ruling authority seeks to change Lebanon's competitive and free market regime.

"Lebanon is going through its worst economic crisis in history. The government and (presidential) term want to change the free economic system to something else,"said Hariri in remarks to reporters after meeting Maronite Patriarch Beshara el-Rahi in Bkirki.

“We have seen a series of appointments without a mechanism, and the judicial appointments did not happen, which all badly serve Lebanon,” he said.

On the controversy over a foreign auditing firm to audit the Central Bank’s accounts, the ex-PM emphasized that “Lebanon's successive governments and ministers are responsible for spending billions and must all be audited including the electricity file.”

Hariri said that Rahi’s Sunday sermon criticizing the political authority “reflects the pain and suffering of Lebanese. Solutions and hope are always there,” he said.

Talks between Hariri and Rahi focused on the general situation in the country, the National News Agency said.

According to al-Markazia media, Hariri is set to hold talks with several religious and spiritual leaders in Lebanon.

He had met on Wednesday with Greek Orthodox Metropolitan of Beirut Elias Aude.

During his talks with Aude, Hariri reiterated that he is not seeking to return to the PM post.

I like how these politicians say the "want to change Lebanon's free economy into something else". Why don't you spell out what that something else is, when everyone knows what it is. They want to change it to a government command and controlled economy that holds all industries, bans private ownership and private property, ban free speech and tv stations and newspapers who are not aligned with it, in other words to socialist/communist system.

I like how he admits that he and his cabinet of ministers are also participants of the robbery schemes that benefited from contracts of Public arena...