Lebanon in a Compounded Economic, Monetary and Political Crisis 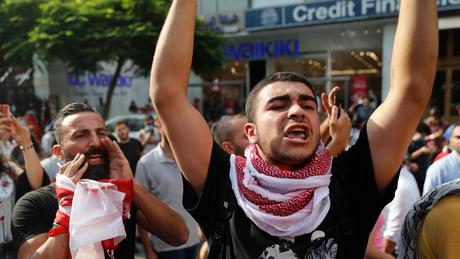 Lebanon is mired in its worst ever economic crisis, marked by an unprecedented plunge of its currency, which has left nearly half of the population in poverty.

The economic collapse has led to mass layoffs and salary cuts, in a country already rocked since late 2019 by mass protests against a political system seen as corrupt and incompetent.

Anxiety at the lack of availability of dollars emerges on September 29, 2019, when hundreds of people take to the streets of central Beirut to protest economic hardship.

Among the hardest hit are petrol station owners who need dollars to pay their suppliers. But media report that banks and exchange offices are limiting dollar sales for fear of running out.

A proposed government tax on messaging applications like WhatsApp submitted on October 17 is the last straw, with thousands taking to the streets in Beirut and other cities, some chanting "the people demand the fall of the regime".

The government of prime minister Saad Hariri scraps the tax the same day, but protests continue over the next weeks, culminating in demonstrations gathering hundreds of thousands demanding an overhaul of the ruling class in place for decades.

On December 19 little-known academic Hassan Diab, who is backed by powerful Hizbullah, is named prime minister, replacing Hariri who resigned in late October under pressure from the street.

Protesters immediately regroup to condemn the appointment, which also outrages members of the Sunni community.

On January 21, 2020, a new government is unveiled, made up of a single political camp, the pro-Iranian Hizbullah and its allies, who have a parliamentary majority.

Demonstrators respond by torching tires and blocking several roads in mainly Sunni towns across the country.

On March 7, Lebanon, whose debt burden is equivalent to nearly 170 percent of its gross domestic product, says it will default on a $1.2-billion Eurobond.

On the 23rd, it says it will discontinue payments on all dollar-denominated Eurobonds.

On April 24, Diab says that banks have lost $5.7 billion (5.2 billion euros) in January and February in spite of restrictions on withdrawals and transfers abroad.

According to official estimates, $2.3 billion were transferred out of the country last year.

On April 30, after three nights of violent clashes in Tripoli, Diab says Lebanon will seek help from the International Monetary Fund, after the government approves a plan to rescue the economy.

On May 13, Lebanon launches talks with the IMF.

In May the president of the money changers union Mahmoud Mrad is arrested and the director of monetary operations at the central bank Mazen Hamdan charged with "manipulation of the national currency".

From June 11-13, after the Lebanese pound hits a new low on the black market, protesters take to the streets after sundown, blocking roads, including in Beirut and Tripoli.

On June 29, the director general of the finance ministry involved in the negotiations with the IMF resigns, citing deep disagreements over the management of the crisis. He is the second member of the negotiating team to go in the space of two weeks.

On July 10, the U.N. rights chief Michelle Bachelet warns that Lebanon's economic crisis is getting out of hand, calling for urgent internal reforms coupled with international support to prevent further mayhem.