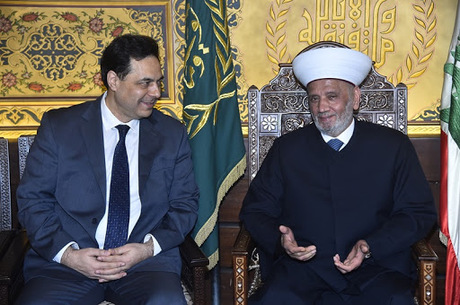 Prime Minister Hassan Diab on Saturday described reports on the government’s intention to resign as “fake news”, affirming ongoing government efforts to “alleviate the suffering of Lebanese citizens” in light of a crunching economic crisis.

“Reports that the government is going to resign are only fake news,” Diab told reporters after meeting Sunni Mufti of the Republic Sheikh Abdul Latif Daryan at Dar el-Fatwa.

“We rely on the Mufti’s experience. There is no doubt that the government is working with momentum to alleviate the burden on citizens, including the financial support for needy families and assistance to the industrial and agricultural sectors and schools," he added.

On his “lengthy” talks with US Ambassador to Lebanon Dorothy Shea a day earlier, the PM said: “Discussions with the ambassador touched on several matters and she expressed every willingness to help Lebanon.”

Reports that Lebanon has a government are only fake news.

Lol as if it would have an impact