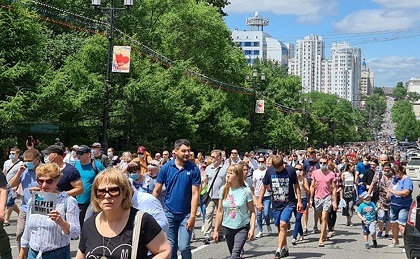 Tens of thousands of protesters marched through the eastern Russian city of Khabarovsk on Saturday in support of a popular local governor arrested this week for allegedly ordering several murders.

A court in Moscow on Friday ruled to hold 50-year-old Sergei Furgal for two months pending trial for the murders of several businessmen 15 years ago, as he vehemently denied any involvement.

Furgal's nationalist Liberal-Democratic Party has thrown its weight behind the governor, and on Saturday said some "35,000 people came out to the streets" in Khabarovsk to protest his arrest.

Local news website DVHab.ru called the rally "the biggest in the history of Khabarovsk", saying the crowds temporarily blocked traffic as they walked through the city of over 600,000.

Footage showed people shouting "Freedom!" "Moscow go away!" and "Sergei Furgal is our choice" as they walked.

Some held posters saying "We are Sergei Furgal!"

The local branch of supporters of Russian opposition leader Alexei Navalny said the protest attracted up to 40 thousand people, calling it an "absolute record for our region."

Smaller rallies were held in other cities in Khabarovsk region, reports said.

His sudden arrest came just days after President Vladimir Putin -- who has been in power for two decades -- won a landslide ballot on constitutional reforms that could allow him to extend his rule until 2036.

Over 40,000 people have now signed a petition demanding Furgal's release.