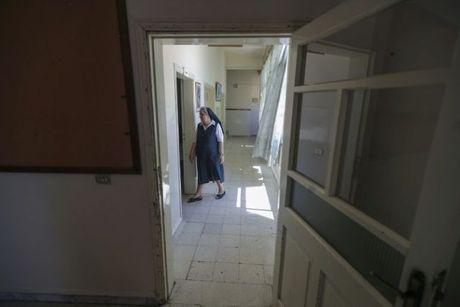 Inside the French-language school she has run for years in east Lebanon, Sister Colette Moughabghab welcomed parents devastated by the news the century-old establishment was locking up its classrooms.

Books are stacked by the stairs leading to the playground that will no longer see pupils flood in the fall, after the school became the latest victim of a crippling economic crisis.

"I did everything to obtain financial aid... but in vain," said Moughabghab, who has run Our Lady of Lourdes in the eastern town of Zahle for four years.

"It's like closing up a home," added the nun, visibly upset about closing a school that had welcomed Christian and Muslim pupils since 1885.

Lebanon, where Arabic is the official language, has a long tradition of education in French.

The first French schools were set up by Christian missionaries in the 19th century before the country came under French mandate in 1920 until its independence in 1943.

Until recent years, Lebanon's French-speaking schools, mostly private and a majority of them Catholic, taught 500,000 children -- equivalent to around half of all pupils nationwide.

But the country's worst economic crisis since the 1975-1990 civil war has left them battling to stay afloat as parents struggle to pay fees.

"Fifty to 70 schools in our network risk closing" by September, Azar said.

"Without the Catholic schools, there will be no French-speaking education in Lebanon."

Up to 80 percent of the schools in his network teach primarily in French and a quarter of the students who frequent them are Muslim.

Fees there are up to half those of high-end private secular schools, which are also struggling to survive.

The French Secular Mission that runs five private teaching institutions has already laid off 180 teachers and expects more than 1,500 students to leave over their inability to pay school fees.

Lebanon's economic crisis has seen tens of thousands of Lebanese lose their jobs or take pay cuts since the fall.

With banks capping dollar withdrawals, the Lebanese pound has lost up to 80 percent of its value on the black market, sparking alarming inflation and plunging a large segment of the population into poverty.

In Sister Colette's office in Zahle, the parents of seven-year-old Julien and his younger brother are worried about the future.

Other parents plan to send their children to other private schools when the new term begins, but Julien's father Samer said he is cash strapped.

"I make about 1.2 million Lebanese pounds a month, which is now worth just a little more than 150 dollars," instead of 800 a year ago, said Samer, who declined to give his surname.

"I won't be able to pay for my second son to go to (private) school next year," said the 47-year-old.

A source at the education ministry said 120,000 pupils were expected to join state-run schools next year, as their parents could no longer afford sending them to private ones.

But that would be an added burden on the public education system.

Already under-equipped and over-crowded, these schools have welcomed hundreds of thousands of Syrian refugee children who fled the war in the country next door.

To avoid the worst, several initiatives have been launched to try to save French-language schools.

The Vatican in May said it would give 200,000 dollars to cover 400 scholarships.

"Our presence in Lebanon is first and foremost educational, and if education -- including in French -- crumbles... we will lose a key tie," he said.