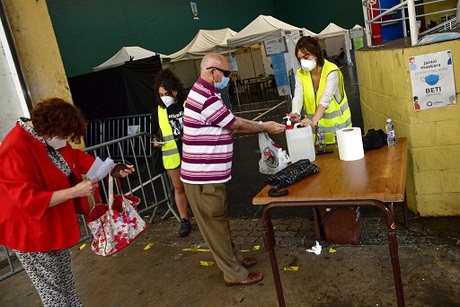 The first regional elections in Spain since the onset of the coronavirus pandemic got under way on Sunday in the northern regions of Galicia and the Basque country, with voters wary of new spikes in infections.

People who have tested positive for COVID-19 are not permitted to vote,  excluding 420 electors from a total of about 4.5 million across the two regions.

Voters were masked and presented their identity card to gloved officials, according to images on public television.

After a drastic drop in the number of cases and deaths in one of the European countries most affected by the pandemic, more than 70 new outbreaks are currently active in Spain.

More than 200,000 people have been in confinement since last weekend in the Lerida area of Catalonia while 70,000 are in lockdown in Galicia.

The town of Ordizia has also been at the center of a new outbreak in the Basque country.

The spikes have led several regions to reinforce the rules around the compulsory wearing of masks.

It is already obligatory to wear a mask throughout Spain in closed public spaces and outside when it is not possible to maintain a social distance of 1.5 metres.

But Catalonia decided on Thursday to enforce it at all times in public, even when the safety distance can be respected.

The Balearic archipelago will also strengthen its rules on the wearing of masks from Monday and other regions such as Andalusia and Aragon plan to follow suit.

In the tourist areas of Catalonia and the Balearics, people bathing or sunbathing on the beach or taking exercise are, however, exempt from wearing a mask.

The elections in the Basque country and in Galicia were due to be held on April 5 but were postponed as the virus advanced across Spain, leaving over 28,400 people dead.

According to opinion polls, the conservatives are likely to retain power in Galicia, and the Basque National Party (PNV) is expected to hold on to the Basque country.