'Unnecessary', Thiem Fires Back at Kyrgios in Adria Tour Spat 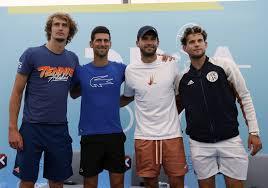 World number three Dominic Thiem said on Monday tennis players "must learn" from the ill-fated Adria Tour and described Nick Kyrgios' criticism of those who took part as "unnecessary".

"We have to learn from the mistakes and be careful nowadays with this pandemic we are facing. That's what we have to take from the Adria Tour," Thiem told reporters at an exhibition tournament in Berlin.

Djokovic later apologized for the event where players embraced across the net and later partied together at a nightclub.

Thiem tested negative for the virus but like all those involved faced fierce criticism and has already apologized.

"Novak and the others didn't commit any crimes, you have to make that point," Thiem added.

"The fact we were criticized is not unfair because we all made mistakes. That's clear.

"But it was way too much at the end, because the whole tournament was well intended."

Kyrgios has been highly critical of anyone who played in the Adria Tour, which he branded a "boneheaded decision" to hold with such little regard for hygiene.

The out-spoken Australian then branded Alexander Zverev "selfish" for partying despite promising to self-isolate following a negative test after playing on the Adria Tour.

Kyrgios and Zverev have pulled out of the Berlin event, which started on Monday amid strict hygiene guidelines with organizers promising "there will be no player parties here".

Zverev said he skipped Berlin to train more, while Kyrgios pulled out amid travel concerns from Australia where the pandemic has worsened with Melbourne back in lockdown.

"The subject is done, Sascha had his reasons for not coming," said Thiem, who took another dig at Kyrgios.

"Certain opinions, especially from Australia, are very unnecessary," he added.

Thiem, who plays on grass in Berlin on Tuesday, also has some doubts about the US Open being held in New York at the end of August despite the pandemic.

"I believe that the decision is not in our hands, but in those of the American Tennis Federation, the American government and the mayor of New York," said Thiem.

"The whole thing is on very shaky legs.

"But I also believe that if it is played, it will be safe for everyone.

"We'll definitely be in a huge bubble and have no contact with the outside world."