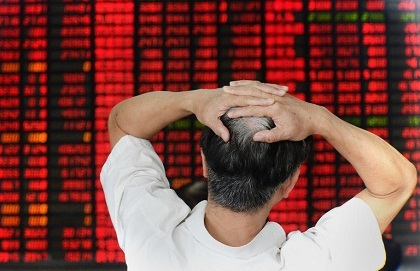 World stock markets fell Tuesday as fears resurfaced over a spike in coronavirus infections around the world, dealers said.

Europe's stock markets were up to around 1.5 percent down, with London doing better than most despite grim UK output data.

Wall Street was a touch weaker at the opening bell as global sentiment was hit by the reimposition of some containment measures in parts of the United States, Australia and Hong Kong.

California, the richest of the US states, ordered all indoor restaurants, bars and movie theaters to re-close, while churches, gyms, shopping malls, hair salons and non-essential offices have been told to shut up shop in several densely populated counties, including Los Angeles.

The British pound slid on data showing that the virus-plagued UK economy shrank by almost a fifth in the three months to April.

A weaker British currency tends to boost share prices of companies listed in London who earn much of their income in dollars.

World oil prices fell further on speculation that top crude producing nations will agree to taper their output cuts at an expanded OPEC+ meeting this week.

News that Singapore's economy, considered a regional barometer in Asia, contracted a mind-boggling 41 percent in the second quarter also provided a stark reality-check for traders on Tuesday.